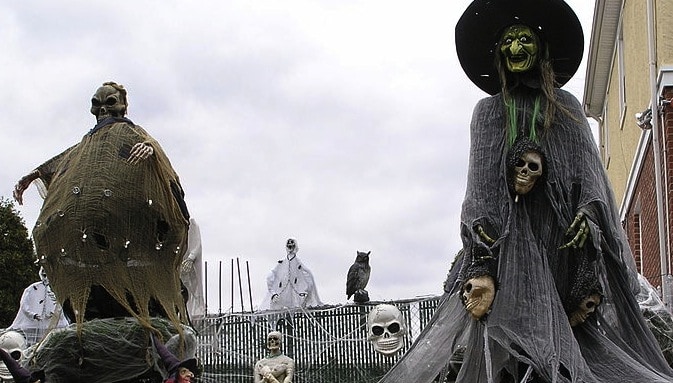 So Halloween, the best holiday yet invented, falls in the middle of the week this year. That’s some candy corn-riddled bullshit, right? Well the good news is, Newslo has your back with this instant-classic list of horror films for every appetite.

Stuck at home this Oct. 31? Try one of these cinematic delights. Some of them are famous, some are obscure; some of them are great, others are laughable. All of them can be a scary good time, and that’s a Fact.

10. The Silence of the Lambs (1991) Sure, this serial killer thriller is the most recent movie to have won all four Oscars for best picture, director, actor and actress, but there’s a new TV version with a way hipper sense of style, so who cares about this dusty old fossil? Forget the fava beans; Jodie Foster’s shoulder pads – now that’s scary.

9. Manos: The Hands of Fate (1966) B-movie aficionados will tell you this forces-of-evil travelogue is likely the worst movie of all time. Hipsters will tell you there’s a new tongue-in-cheek video game adaptation for smartphones. We here at Newslo, however, would rather tell you that several of the cast and crew members met terrible, depressing ends in real life, because we like to bum you out.

8. Scream (1996) Drew Barrymore dies very early on in this self-aware teen slasher, or hadn’t you heard?

7. Kwaidan (1964) This Japanese film might be perfect viewing for the horror fan who’s seen everything. Actually a quartet of four short scary stories, “Kwaidan” is moody, beautiful and haunting with an atmospheric score and breathtaking use of soundstage sets. Best of all, it was released nine years before Drew Barrymore was born, so she definitely doesn’t die in this one.

3. Monkey Shines (1988) “Night of the Living Dead” director George A. Romero once made a movie about a quadriplegic man who has the astronomical bad luck to get stuck with a demented helper monkey who falls in love with him and starts killing the people in his life. There’s an excruciating sex scene (between two humans, thank God), and the monkey gets evil, red POV shots. We’re only telling you these things because, if we didn’t know, we’d want someone to tell us.

2. Paranormal Activity (2004) If you just can’t get enough of privileged, self-involved yuppies keeping their problems in front of the camera, then this barely scary indie film and its three or eight sequels are just the thing for you. A metaphor for the navel-gazing YouTube age, it’s downright spooky how big of a hit this was.

1. The Exorcist (1973) In order to get permission to shoot the archeological dig sequence at the beginning of this must-see demon possession staple, the film crew had to share their recipe for fake blood with the Iraqi government. No word on what they shared with the Vatican in order to get permission for an underage girl to masturbate with a crucifix. Still considered by many to be the scariest movie of all time, this is the story of an intrepid mother and daughter who will stop at nothing to keep from moving out of their charming Georgetown brownstone. And we do mean nothing.