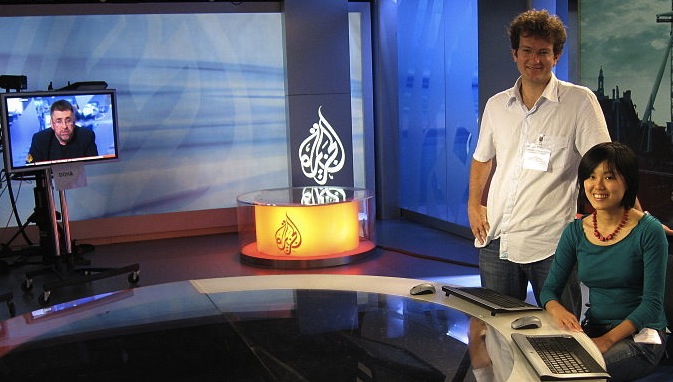 NEW YORK – CNN headquarters is on high-alert this week as the new network Al Jazeera America begins broadcasting. CNN executives are bracing themselves for what experts warn could be a devastating attack of real, relevant news programming, and are asking the Department of Homeland Security to act preemptively against what they call a “terrorist plot of reputable journalism.”

Zucker also argued that Al Jazeera America will inevitably be a “primitive, uncivilized” network. “Will they even have holograms or a big magic board?” Zucker asked. “Almost sounds like they’ll be broadcasting from a cave.”

Some media experts are sounding the alarm and warning that Al Jazeera America will likely offer content that’s far too level-headed and worldly for the average American’s psyche to handle. In his column, Brian Stelter of The New York Times said that the network will be a “PBS-like news channel 24-hours a day,” and is poised to provide viewers a “more sober look at the news.”

Ehab Al Shihabi, Al Jazeera America’s acting chief executive, has promised that the channel’s viewers “will see a news channel unlike the others, as [its] programming proves Al Jazeera America will air fact-based, unbiased and in-depth news.” Zucker—who himself has been called “the most destructive media executive ever to exist”—claims that Al Jazeera’s true aim is to launch a “metaphorical dirty bomb” in the minds of American viewers.

“Unless they witness two pundits screaming at each other at least once every fifteen minutes, Americans won’t even know they’re watching the news,” Ailes said. “Al Jazeera America wants to exploit that vulnerability and change America from the inside. Soon we’ll all be growing beards and declining pork, and I for one shudder at the thought of an America without Jimmy Dean.”