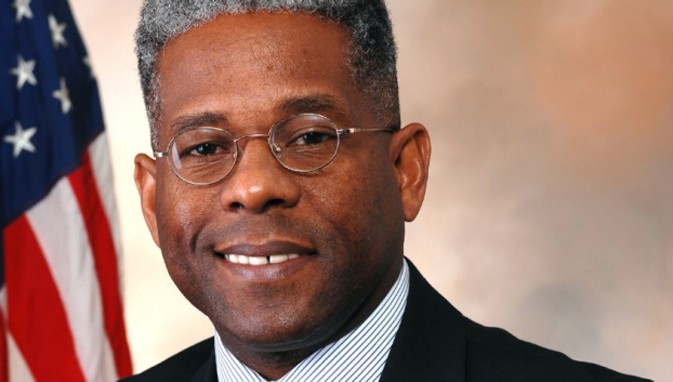 PALM BEACH GARDENS, Fla. – Former Republican Congressman and Fox News contributor Allen West this week released the cover image of his upcoming memoir, “Guardian of the Republic: An American Ronin’s Journey to Faith, Family and Freedom.” The striking image of West, seated on a motorcycle embossed with the American Flag and the head of a bald eagle, is said to foreshadow the depth of intellectual knowledge within the book.

“The bald eagle’s mouth is wide open, screaming, just like all of America is screaming against Barack Obama and his liberal agenda,” said West. “Or maybe he’s hungry and about to take a bite, just like America is hungry for someone to come take a bite out of Barack Obama. It could go either way.”

While the contents of the manuscript are being kept under wraps, West’s co-author, Michele Hickford—who worked in West’s congressional office—promises a powerful, gripping narrative and almost genius-level observations on important topics of the day. “He writes the majority of everything,” she said, and claimed her biggest job was dumbing-down the material to make it coherent to the average reader. “He has an encyclopedic knowledge of history and military details, and sometimes for the reader there’s an assumption that you know all these things. Like for example, he just assumed that everyone knew Barack Obama was born in Kenya, so I had to add the point into the text so the reader doesn’t get confused.”

When asked by Fox News host Greta Van Susteren about the book, West replied, “What I want to do is talk about the early lessons in my life. The influence of my parents. My political philosophy. And what I see as far as vision, a way ahead to get us out of this crisis and restore this great republic to the greatness that it can be and that it should be. That’s why I chose to pose on the Harley.”

The addition of the word ‘Ronin’ in the subtitle was done intentionally, despite misgivings that it would lead book cover readers to assume West was of Asian descent. “We felt that adding ‘American’ right in front of that foreign-sounding word would clarify things. I mean that’s just how Allen rolls,” said Hickford. “Anyone who’s ever heard him speak in person knows how conversational he is. His voice definitely comes through in the book.”

With the striking cover photo, West hoped to carve himself a niche in the marketplace as the hands-down most awesome former politician with a book coming out in 2014 around. “They wanted me to dress casual and give the book cover reader a glimpse into my soul,” said West. “So here it is. This is me. Drink it in.”