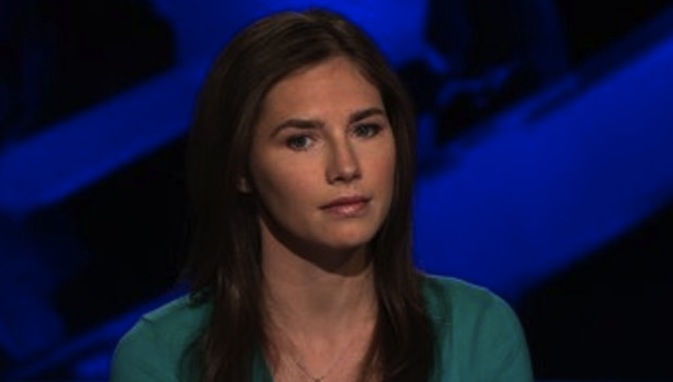 NEW YORK – True-crime fans have been surprised to discover that, contrary to expectations, the new memoir from convicted-and-then-acquitted murderer Amanda Knox is naught but a series of eloquent rhapsodies and condemnations of the finest dining establishments in Italy. “Waiting to Be Heard” apparently takes its name from a particularly memorable and loud experience in a bustling grotto in Naples, where the chicken scaloppini is reportedly “to die for.”

“After the antipasti, my friend Raffaele [Sollecito] and I simply could not get the wait-staff’s attention for love nor money,” an animated Knox, gesturing with both hands, told CNN’s Chris Cuomo last night. “We are shouting, we are waving, we are launching hilarious fake toast after fake toast as we bang our butter knives against our empty wine glasses. Finally, quite by accident, I trip a busboy. Flatware goes flying, and we are the center of attention. We finished with a braised eggplant risotto drizzled with lemon-zucchini aioli and then an impudent coconut gelato.”

Cuomo repeatedly asked Knox about Meredith Kercher. Kercher, a 21-year-old Briton, was found semi-clothed with her throat slashed in the Umbria villa she shared with Knox. After years of legal floundering, Knox was acquitted of Kercher’s death in 2011. That acquittal was itself tossed out in March. Perhaps not wishing to fuel the fire, Knox demurely said little about the case except that to note she’s “had occasion to miss such masterful cooking.”

The international press devoured the attractive and not-always-forthcoming Knox, much the same way, apparently, that she devoured the “new style” boneless oxtail with celeriac puree at Il Convivio di Troianai in Rome.

“From start to finish I was whisked away, as if in a dream,” Knox writes. “But the next morning: nightmare! I open the door and red everywhere! Raffa has attempted another recipe too difficult for him. Haha, la dolce vita! Oysters with bloodies for brunch – diploids, in season and tasty.”