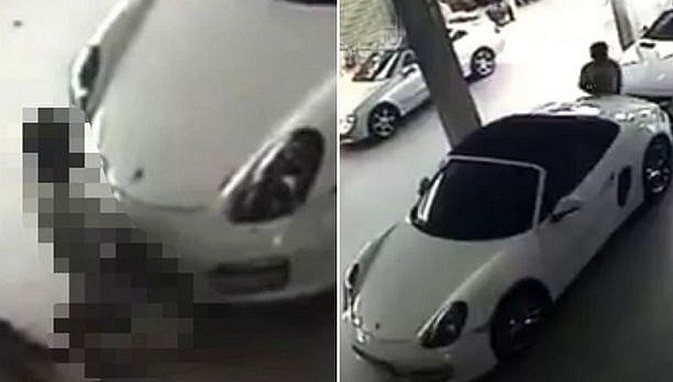 “In a rather bizarre occurrence, a man was caught on camera having sex with a Porsche. The strange tryst was filmed by a security camera in Thailand last weekend, when the man, dressed in a t-shirt and trousers, was seen at first covertly walking around the exotic vehicle inside a garage.

“Then, after checking several times to make sure no one was looking, he proceeded to get intimate with both the front and rear ends of the vehicle, before quickly fleeing the scene. People who are sexually attracted to machines are known as mechanophiles.

“An American, Edward Smith, 62, has told how he has had sex with more than 1,000 cars in his lifetime. His unusual conquests have included roaring Mustangs, luxury Jaguars and even attack helicopters. He said: “Some guys look at breasts and butts on beautiful women. I look at the front and rear on beautiful cars.”

However, whether it has to do with the law in Thailand, or perhaps the owner of the violated Porsche has decided to pursue a personal vendetta against Smith, but the American was arrested shortly after the incident and is currently awaiting trial in a prison in downtown Bangkok. His attorney said in a statement that “Mr. Smith is suffering from a compulsive psychological disorder and should not be victimized by the court because of a harmless act.”

On the other hand, Bangkok District Attorney told Newslo that “the law is the law, regardless of whether you’re in your own country or a foreign one, and especially if you’re violating someone’s rights or the rights of someone’s property.” He also added: “Essentially, we’re talking rape. The Porsche’s owner didn’t give Smith permission, and the innocent car was flat out violated. We just can’t have that, we’re not animals.”