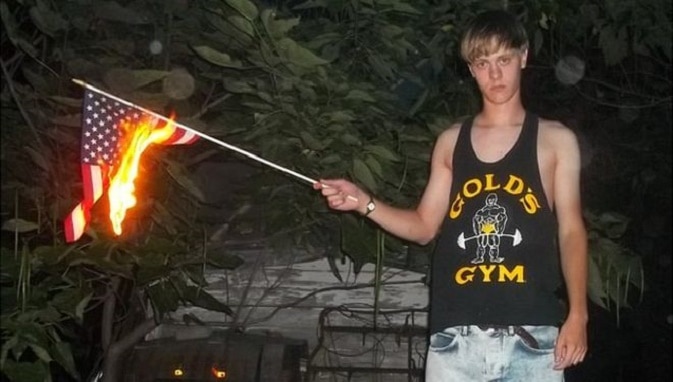 Dylann Roof: “It Is My Legal Right To Be Locked Away In An All-White Prison”

“The accused Charleston church shooter now faces federal hate crime charges for allegedly targeting his victims on the basis of their race and religion. “We think that this is exactly the type of case that that the federal hate crimes statutes were, in fact, conceived to cover,” U.S. Attorney General Loretta Lynch said Wednesday as she announced that a federal grand jury has indicted Dylann Roof. “Racially motivated violence such as this is the original domestic terrorism.”

“The grand jury’s indictment charges Roof with 33 counts, including federal hate crime and firearms charges, Lynch said. South Carolina does not have a hate crime law, Lynch said. Roof, 21, already faces a number of state charges in connection with the June 17 Bible study attack at Emanuel African Methodist Episcopal Church. Nine people were killed, including the Rev. Clementa Pinckney, who was also a state senator.

Commenting on his indictment, Roof stated that he has “absolutely no regrets” after the massacre he committed and that he “also has constitutional rights,” even though he is charged with a crime.

“Let’s get one thing straight – one of the best things about America that was made by our white ancestors is the fact that every single person, no matter how hated or despised, has legal rights,” Roof said. “I did what I did and I don’t regret it at all, I believe it was the right thing to do. However, I’m not trying to escape or deny the consequences of my actions. I do, however, wish to spend my jail sentence in an all-white penitentiary, because I have the right to that.”

Roof then opined that what makes “white America” truly great is the fact that “everybody has a fair shot at defending themselves in front of a court without the fear of an unfair trial.”

“It was made that way by our great founding fathers who, let me remind you, were also slave-owners. I don’t want to be put in a mixed-race prison with members of the slave race. In fact, I don’t want to share a cell or prison with any other race. I’m white all the way and I want to be incarcerated with my own kind. I have a legal right to it and I deserve it,” Roof concluded.