Right-wing polemicist Ann Coulter, who last year authored a pro-Trump book called In Trump We Trust, is very unhappy about the early days of his presidency. In an interview with the Daily Caller, Coulter fumed that Trump so far has not kept his promises to build the border wall and to roll back protections for undocumented immigrants in the United States whose parents brought them into the country when they were children. During the interview, Coulter explained that she backed Trump despite his “grotesque” personality because she believed he would really deliver the goods on immigration, which is the issue she most cares about. “It’s a nightmare,” Coulter said, while adding that if Trump keeps going in the direction he has been, she’ll have to concede that the “Trump haters were right.”

When asked if she admitted to having made a mistake by opting to support the president during his campaign, Coulter argued that it’s not a matter of making mistakes or not. “Everybody makes mistakes, it goes with the territory,” she said. “I was one of his loudest supporters and I’m not ashamed to admit it. Like I said – despite my personal opinion of him, I’m still one of his most vocal supporters because I choose to be and because I happen to think he’s the best we have to offer at this time. I’m saying this in terms of the policy he’s promised to enforce and the way he’s promised to lead the country. But, as aforementioned, he’s not doing a very good job of that so far. As a matter of fact – I can’t believe I’m about to say this – but he’s actually doing a terrible job of running the country. Things need to change soon. And by soon I mean ASAP.”

Asked to elaborate on why she continues to support Trump even though he’s doing “a terrible job,” the conservative pundit said, “I guess because, at the end of the day, we just aren’t allowed to question God’s choices. That’s something that never ends well and those who think they have the luxury of meddling in divine affairs most often end up getting the short end of the stick. Do I think Donald Trump is doing a crappy job running the country? Yes. Do I think he needs to start keeping his campaign promises, like, yesterday? Yes. But, do I think that we’re allowed to argue with the fact that he was chosen to become president by God? I most certainly do not. God works in mysterious ways, we all know that, so we just have to hope that the Lord is going about doing things a bit slower this time.”

“Look, lying to ourselves won’t do us any good,” Coulter added. “We can tell ourselves that we’ve got people who could do the job better and build the wall faster and make sure to stop illegal immigration quicker. But, the thing is, the cat’s out of the bag now. Trump is not a politician, he’s a businessman. As much as we thought that was an advantage, clearly we were wrong, and that includes me. However, if you look back through history, you’ll see that he’s the only candidate ever to run for president who was supported by God. And when it’s all said and done, that fact is something that takes precedent over everything else. We can’t change it, we can’t argue with it, we can’t do much about it. All we can do is make our peace with it and move on. The only way we’d ever be able to think about replacing Trump would be if God suddenly decided to stop supporting him. Then it’d be open hunting season on him. But, that’s unlikely to happen, considering everything the Lord has granted him during his lifetime,” she concluded. 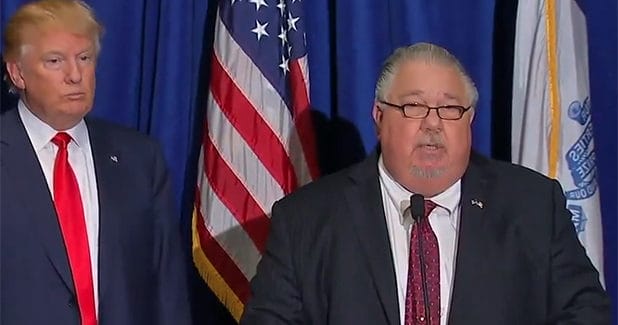 Trump’s Top Scientist Pick: “Scientists Are Just Dumb Regular People That Think Dinosaurs Existed And The Earth Is Getting Warmer”