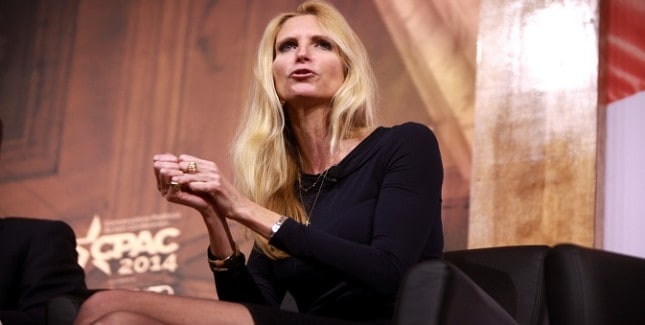 Ann Coulter: “We Shouldn’t Forget That African-Americans’ Homeland Is Africa”

“Conservative commentator Ann Coulter said that the U.S. should close its borders for 10 years and blamed “left-wingers who hate America” for corrupting the U.S. immigration system. During an interview with PJ Media to promote her new anti-immigration book, titled “Adios, America!,” Coulter criticized the federal government for failing to enforce laws that would prevent criminals from migrating to the U.S.

““There’s a law on the books that says if a country will not take a criminal back the attorney general shall, not may, shall deny visas, any visas coming from that country – that is on the books right now. Has it been enforced by Republicans or Democrats? No, it has not,” said the political pundit.

“Also according to Coulter, the demographic that has suffered the most from immigration are African-Americans. “Particularly, it’s African-Americans who are hurt the most by all of this low-wage immigration. It’s driving their wages down. It’s killing them in the job market,” she said.

“And that’s another thing,” Coulter continued. “We all know where African-Americans come from, right? Africa is, in fact, their homeland. The whole world knows the story of how they got here – the whole slavery thing, bla bla etc. Don’t you think they’ve had enough of the American dream? Don’t you think it’s time for them to leave America to the people who actually made it great?”

Responding to a request to elaborate on her opinion, the controversial critic stated: “They [white people] brought armies and drove off Native Americans. Those same white people then brought slaves from Africa and enabled them to live here. So, in essence, we are responsible for the creation of America and we deserve it more than anyone. Then we abolished slavery and granted black people their freedom. And today they’ve even got a semi-black President. Haven’t they had their share of the good life?!”