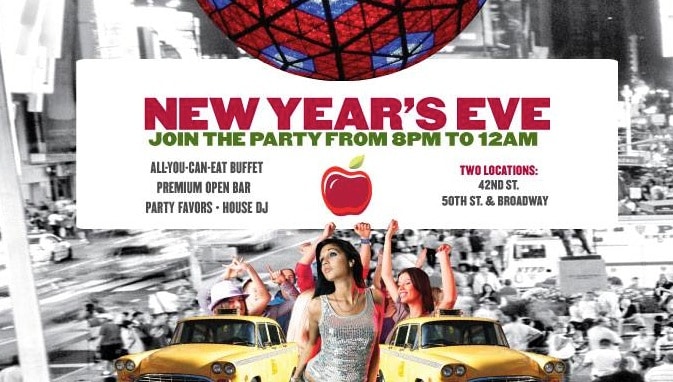 “We’re very excited about the new menu,” said Zane Tankel, manager of all of New York’s Applebee’s locations. “We’ve felt for some time that our boneless wings appetizer alone was worth $100, combine that with an entrée like our riblet basket or creamy parmesan chicken and top it off with a triple chocolate meltdown and the new price point became obvious.”

According to the website, the New Year’s Eve parties will feature party favors, a DJ, a dance floor, and non-stop fun as well as unlimited selections off their ‘Under 550 Calories’ menu. All for the single price of $375. Children under 12 will be welcomed into the party for only $250 in preview of prices  patrons will find on the 2014 Kids Menu.

“To be honest, it was time for a change,” admitted Tankel. “The whole two-for-twenty business was putting us in the hole big time. Hopefully, this new menu will allow us to stop bleeding money.”

Though the party is scheduled to run from 8 pm to midnight, guests will be allowed to leave at 11 pm if they wish, according to the website. “Though why anyone would want to leave early is beyond me,” said Tankel, who promises that ‘some fairly sophisticated culinary people’ will be preparing the food. “Only chefs who can demonstrate a mastery of our Sizzling Double Barrel Whiskey Sirloins are allowed in an Applebee’s kitchen.”