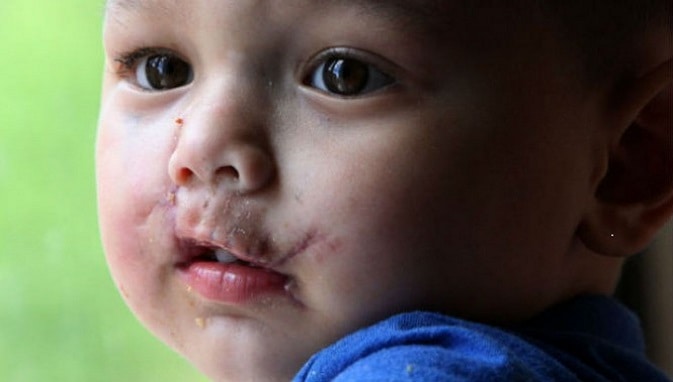 Atlanta, GA-Members of the swat team who disfigured a child during a failed drug bust won’t face charges after a grand jury  announced their decision this week after spending six days hearing evidence. However, a spokesperson for the Habersham swat team believes the grand jury didn’t go far enough, saying these men should be seen as heroes, having given the child a reason to “develop character”.

The child, 19-month old Bounkham Phoensavanh, suffered burns to his face, brain injury, a collapsed lung, and lost part of his nose and his entire left nipple, when officers threw a flash grenade into his crib while raiding the house under the auspice of a “no knock” warrant.

Though neither drugs nor weapons were found in the house during the raid spokesperson Hubert “Red” Horshon said both he and the city of Atlanta consider the search to be a huge success:

“What’s one of the biggest issues children deal with today? I’d say it’s an insecurity with their physical appearance. Well, young Bo-Bounk… Young Ham will never have to deal with those issues. In fact he’ll learn to compensate for his grotesque appearance. He’ll develop a sense of humor, he’ll learn to share. Now when did it become a bad thing to instill these values in a child?”

When interviewed by Newslo the cities mayor-who refused to discuss why the city of Atlanta would no longer pay for the child’s hospital bills after promising the parents that they’d do just that-said he’s “mulling the idea” of designating a special day to thank members of the swat team involved in the raid.

“I mean it’s only right the parents of little baby Ham should get to thank these brave men publicly for helping instill values within their child past just the physical. Though I don’t know how they’ll ever be able to really thank them properly. I mean can you ever truly put a price on lessons of inner beauty in today’s culture of photoshopping and Instagram?”