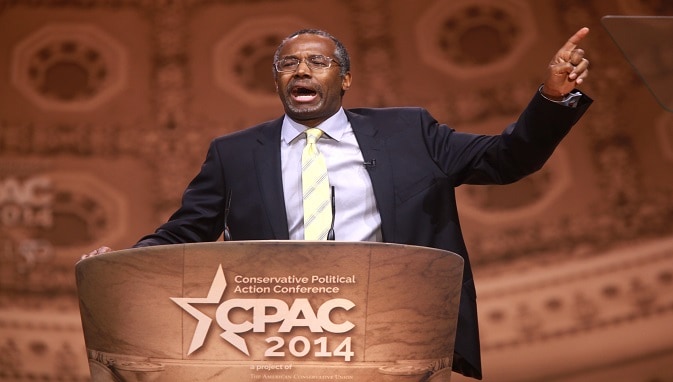 Republican presidential candidate Ben Carson defended his controversial comments that the Holocaust could have been prevented if only the Jewish people in Europe had been armed. “It’s not hyperbole at all,” Carson said Sunday on CBS’ “Face the Nation.”

“Whether it’s on our doorstep or whether it’s 50 years away, it’s still a concern and it’s something that we must guard against. That’s one of the real purposes of having a constitution. I think the founders were really quite insightful into looking at possibilities and understanding what has happened in other places and trying to put together something that would prevent that from happening here.”

Speaking to Newslo, Carson further elaborated by saying that “guns might not be the safest way we have of protecting ourselves, but they’re still the best we’ve got.” He added: “And when I hear that people don’t want to own weapons out of fear of accidentally hurting themselves or their children and other family members, I ask myself, ‘Are they aware that not owning a weapon doesn’t mean that other people aren’t going to own them as well, especially criminals?’ They are a necessary evil, and that’s exactly the problem – they ARE necessary.”

The retired neurosurgeon also stated that “guns have the potential of bringing a lot of good to people who own them,” despite the fact that they have “already brought so many misfortunes.”

“I hear that there are still arguments taking place regarding Planned Parenthood,” Carson said. “I can tell you that, as bad and damaging as that organization is and has been in the past, the only reason why it has somehow managed to survive until today is because babies are not physically capable of carrying guns. Otherwise, the babies could defend themselves against Planned Parenthood doctors who are there to murder them.”

He further elaborated: “Imagine this scene: You have a pregnant woman who comes in to have an abortion. And the gynecologist scrubs in, makes the preparations and then just as he’s about to perform the procedure, this mini-Rambo baby comes out of it’s mother’s womb, all commando-looking, ripped and full of battle scars, carrying an M-16, and goes, ‘Say ‘ello to my little friend,’ and blasts the doctor away.

“Actually, wait a minute; that might not be such a bad idea,” Carson added, murmuring more for himself and looking at the floor. “I might just suggest that to DARPA or the Department of Defense. I don’t think the CIA would be interested, though, but these two agencies might be. Hmm, commando babies…cute and cuddly one second, and wham, you’re dead the next. I should have thought of that sooner. Excuse me, gentlemen, I’m going to have to take a rain check on this interview,” he stated and left the room in an obvious hurry.