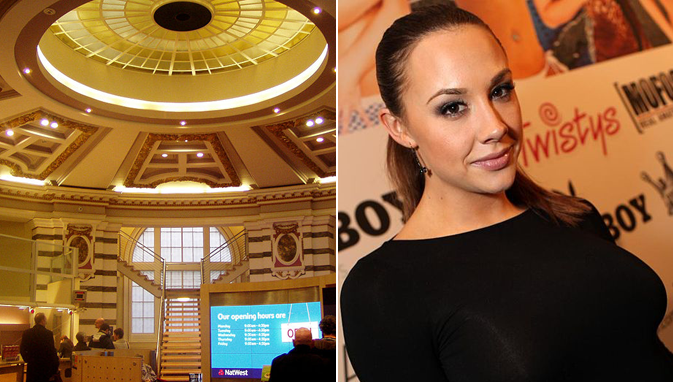 BY THE SIDE OF A BACKYARD POOL SOMEWHERE IN SAN FERNANDO VALLEY, Calif. — Adult Film Star Chanel Preston today said that City National Bank in Los Angeles, often called the “bank to the stars”, refused to accept her legally-earned despoits due to “compliance issues.” When asked which compliance rules Preston was guilty of ignoring, a spokesman for the bank replied, “The bit where you don’t earn money by getting gangbanged by seven fraternity brothers at the same time. The same exact time. You have to see it to believe it.”

“I was very surprised when they wouldn’t take my money,” said the star of nearly 150 pornographic films. “Not surprised in the ‘Oh wow, it’s the pool boy, I should take off my clothes’ way, but pretty surprised.”

Preston’s experience is not unique, as many of the largest banks in the US and UK will not do business with the adult entertianment industry for moral reasons. “Let’s face it, when people say they are in the adult entertainment industry, they are either talking about having sex in front of cameras with things like pork products or large barnyard animals, or they are working the vaudeville circuit,” said FDIC spokesperson David Barr. “No bank wants anything to do with either of those professions. The have a reputation to uphold.”

Some have questioned why money earned through consensually-recorded sexual activity between barely-legal adults is considered untouchable when money illegally earned by foreign drug cartels and often used to fund terrorist activities against the United States is welcomed with open arms.

Zames claimed that despite being accused in 2003 of allowing $9 billion in wire transactions around the world for drug dealers; paying a $90 million settlement stemming from violating economic sanctions against Iran, Cuba, and other countries under U.S. embargo; and being cited this January for “critical deficiencies” in its anti-money-laundering policies, JP Morgan’s practices reflect whoesome, family values.

“Look, every family in America has arguments, fights, does laundry,” said Zames. “Why should we punish wealthy foreigners for doing the same thing but on a larger scale? At the same time, nobody in America ever has sex with a lamp post, so we don’t want to do business with anyone who has.”

For her part, Preston is taking her rejection from City National Bank in stride. “It’s a bummer, but I’m used to it. The only time bankers give me any respect is when they’re watching my films at 3:30 in morning while their prozac-addicted wife is asleep in the next room,” she said. “I’ll just continue to stuff my millions under my mattress. But it’s a very heavy mattress and I lift it all by myself. Would you mind coming into my bedroom and helping me stuff large wads into my tight spaces?”