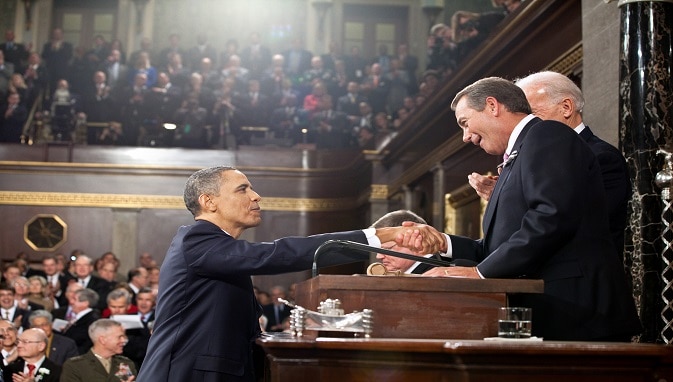 Washington-Less than a month after House Speaker John Boehner said the U.S. would have “no choice” but to put “boots on the ground” when President Obama’s strategy for combating ISIS inevitably fails, Boehner has announced plans for select members of Congress to infiltrate the terrorist organization.

Late last month, in an interview with George Stephanopulos, the House Speaker criticized the President for saying he wouldn’t send in ground troops and instead would rely on American air strikes. After saying he would never announce to the world what he wouldn’t do as President, Boehner opined that American troops would have to be committed to the ground, stating that “We have no choice. These are Barbarians. They intended to kills us. And if we don’t destroy them first, we’re going to pay the price.”

“The fact is we’ve waited for this president to take the right stance, and once again he’s shown us he’d rather hold hands with America’s enemy than bring them to justice.” said Boehner, explaining that he, and a number of “personally selected” congressmen would paratroop into various places in the Middle East where ISIS presence is strongest. Once there they would then infiltrate the terrorist organization and slow down its work by “99 percent”.

“We’ve got an All-Star cast going into the belly of the beast. A real who’s who of politicians who know how to stop things from getting done.” said Boehner. “They’re going to work their way up the ranks very quickly.”

Laying out the details for Operation Gridlock Boehner stated that this wouldn’t be a “cloak and silencer CIA thing”.

“When Rand Paul tries to get in good with ISIS he’s going to do so as Rand Paul. Very quickly these ISIS members are going to find we’re not so different from them. We both want forms of government based upon religious values, and neither of us can stand seeing women walking around like they are people or something. Once we build that trust it’ll all be over.”

“Once they accept us we start very, very long debates, over things that would seem impossible to debate. For instance say ISIS wants to harm an American city. Well we simply argue that American city doesn’t exist. It was just a rumor started up by map makers who were trying to help their profession prosper. Then we’ve got them arguing about the ethics of map makers, and nothing tangible gets done that day.”

After Boehner’s press conference the President immediately held his own in response to Operation Gridlock.

“You know I love this idea.” said the President from the Rose Garden, “It’s about time military families whose lives have been disrupted this last decade see that we here in Washington are willing to sacrifice too. In fact I’d like to see the House Speaker off as quickly as possible. They honed their gridlock abilities here, now it’s time for them to get to work.”

The second conference quickly came to an end as ten men with wagons full of documents and folders wheeled them out to the President.

“Hey Mister President where do you want these laws you’ve been trying to get passed for the last six years?” asked one of the men.

“Oh, no bring those back in side.” responded Obama, “all those congressmen haven’t left yet, some are still mucking up the gears.”