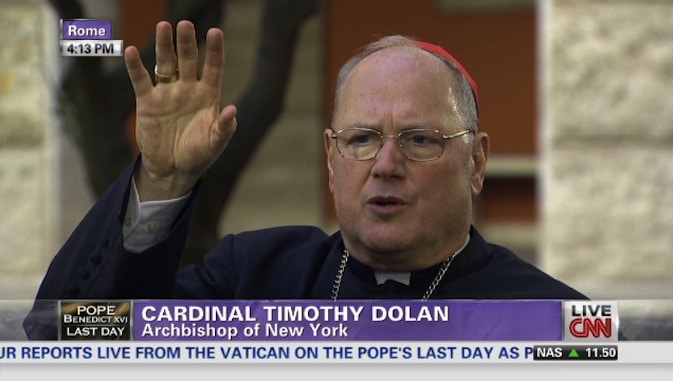 In an interview with “Meet the Press” that aired Sunday, Dolan reiterated his stance on the divisive issue and claimed that the church has “been outmarketed.”

Dolan announced that the Archdiocese of New York would begin consulting with top Manhattan-based ad agency Merkin Strategies counter the growing support of same-sex marriage and “style the Church’s image and curb backlash on divisive issues like gay marriage and abortion.”

Dolan said that the church would utilize “modern strategies to combat modern problems. “Our goal is to maintain our position against homosexuality and sin, but at the same time welcome all people into the church. Keep in mind, we believe in miracles, so that’s not as impossible as it sounds.”

“We’ve been caricatured as being anti-gay,” lamented Dolan. “We don’t want a caricature; the Church’s message should be like a lush oil-painting—anti-gay or not.”

Dolan told moderator David Gregory that the Church “often has difficulty promoting values that originate with God while at the same time maintaining a welcoming, Christ-like image.”

The high-profile partnership with Merkin is another indicator of Catholic Church’s increasing reliance on outside firms to handle sensitive issues. In November, an office of the Vatican’s central bureaucracy hired accounting firm EY (formerly known as Ernst & Young) to audit the finances of the Vatican City State administration.

Dolan said that outside help from marketing and public relations experts would clarify the Church’s position on same-sex marriage, which has been murky ever since newly elected Pope Francis scolded Catholic leaders for being “obsessed” with issues like same-sex marriage and abortion.

“We can’t please everybody and God at the same time, but advertising doesn’t rival religion as the world’s largest industry for no reason,” said Dolan.