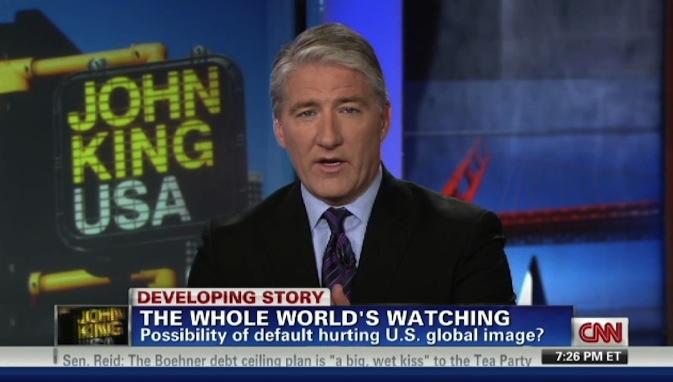 CNN Insider: US Default Would Save the Network

NEW YORK – A CNN executive speaking on the condition of anonymity today said that the prospect of the United States defaulting on its debt—a likely event if the debt ceiling is not raised by October 17—has “reinvigorated” the fledging network. Executives believe that a default, which may have devastating economic consequences, would give the network’s anchors “thousands of hours’ worth of coverage possibilities,” and believe that CNN is “is the network best equipped to cover global turmoil,” with its overseas correspondents.

“Many experts believe that if the United States goes into default, the shit is going to hit the fan in a big way,” the executive said. “We’re talking global financial crisis. This is perfect for CNN, because unlike Fox and MSNBC, we have correspondents all over the globe, ready to film the inevitable riots and mayhem at a moment’s notice.”

“Everyone here is just giddy about it,” he added.

The executive said that many of his colleagues have been “manning the phones to Washington” and persuading lawmakers to reject House Speaker John Boehner’s proposal to push the debt ceiling deadline back six weeks.  “The sooner the better,” the executive said. “We’ve been in third place for years now, and we can’t wait any longer.”

On Thursday, Christine Lagarde, chief of the International Monetary Fund (IMF), joined a long list of experts in warning lawmakers that failing to increase the debt limit would “cause not only serious damage to the U.S. economy but also to the global economy as a result of the spillover effects.” Economists predict that the damage caused by a US default “will exceed that of the Lehman Brothers collapse five years ago: Stock market indexes will plummet, borrowing rates will soar and foreign countries holding U.S. Treasury bonds will be devastated by the fallout.”

Such a scenario is “like winning the lottery” for CNN executives, however, who see it as “perhaps the only way [CNN] will survive as a network.”

“Disaster is our bread and butter,” CNN Worldwide Jeff Zucker reportedly told his team. “Tsunamis, terrorist attacks, mass shootings. But all of those are more-or-less local events. A global economic meltdown, however, is the kind of disaster only CNN can cover well.”