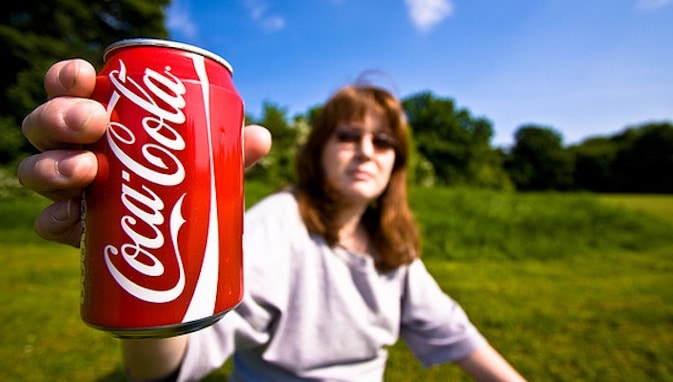 ATLANTA—Sugary soft drinks long have been blamed for the increased prevalence of obesity, diabetes, and tooth decay. Now, thanks to the Coca-Cola Company’s “Summer of Sharing” campaign, oral herpes can be added to the list of soda-related maladies bubbling up across the globe.

The company suggests that drinkers “Share a Coke” with their “family members, friends, coworkers and people they’d like to know better.” To make the experience even more intimate, they’ve replaced the classic Coca-Cola logo with new labels featuring first names common among teens and millenials, as well as nicknames like “BFF,” “Bestie,” “Wingman,” and “Jezebel.”

Stuart Kronauge, senior vice president of sparkling brands for the company, says, “enjoying a Coke with your name on it and sharing the occasion with someone else makes these moments even more special.

“In fact, they’ll last forever,” added Kronauge. “Each time someone cracks open a Coke or a cherry red blister breaks out on your lip, you’ll remember the summer when all the magic began.”

The #ShareaCoke campaign runs through August, which coincides with Herpes Awareness Month.

Zach Palmer, 18, applauds the brand for finding a sharable way to speak to his generation. “I found a bottle with my girlfriend’s name on it and started passing it around to all my buddies, so they could take a swig and a selfie with it.”

He claims, “The whole thing totally went viral on Facebook. I only wish my girlfriend were more down with it. For some reason, all the indiscriminate sharing managed to get under her skin.”

Palmer’s girlfriend, Emily Malkin, admitted she didn’t mind the attention so much as the subtle message the bottle conveyed. “It totally reinforced an unhealthy body ideal,” claimed Malkin.

“The label read, ‘Diet Emily.’ It’s hard to see that as anything but a criticism of my body and a suggestion from my boyfriend that I go on a diet.”

Malkin is confident that “Zach will get a taste of his own medicine after he realizes that he just drank from the same bottle as Tim [Johnson], who totally has a raging case of herpes.”