Kellyanne Conway denounced reports about Donald Trump being compromised by Russia but stopped just short of denying them. Trump’s senior advisor and former campaign manager appeared Wednesday morning on “Good Morning America,” where she described the reports as “unsubstantiated, uncorroborated.” Buzfeed posted what was purported to be a 35-page dossier presented to both Trump and President Barack Obama detailing a former British intelligence officer’s claims about Russia gathering compromising information about the president-elect. Also in the document, a source says Trump hired the presidential suite of the Ritz Carlton Hotel in Moscow, where he knew President Obama and Michelle Obama had stayed on one of their official trips. The source goes to say that Trump asked prostitutes to perform a “golden showers (urination) show” on the bed where the Obamas had slept.

Conway initially attempted to deflect the question by arguing that the entirety of the dossier was “not even fake news.” “Honestly, I have to say, the person who came up with all these lies, I mean you’ve got to give him props, he’s very creative. Maybe he’s in the wrong line of business, he should have been a reporter or something, because he’s very talented when it comes to fabricating heinous lies,” she said. However, when asked again about the alleged sex show, Trump’s advisor indirectly admitted that there was, indeed, fire where there was initially smoke. “Look, we’re talking about an entirely different country here, alright,” she said. “They were under communism for more than a century or so, and you know, when you come from that sort of regime, when you’re born under an iron boot, and then suddenly you break free, you tend to get a little bit off the chain. All that freedom is like a drug, I imagine the change must have been pretty intoxicating.”

“To my knowledge, and I have consulted a number of people about this, apparently, golden showers is something that’s completely legal in Russia, so, you know, as strange as it may seem to us, it’s not our place to judge. They’re just different, that’s all. And if they enjoy being urinated on, then that’s their problem,” Conway said. Asked to elaborate on the fact that the dossier clearly states it was the President-elect who asked for the show to be performed specifically on the same bed in which the Obamas had slept, she argued that there was “absolutely nothing racist about that whatsoever.” “I mean, what was he supposed to do – ask for another king-size bed to be placed in the suite just so he could preserve the sanctity and cleanliness of the bed in which His Highness Barack Obama and his wife had slept?” she argued.

“Come on, be real – God only knows what the Pope does to young altar boys every night in his bed and you don’t see the Vatican’s current assets going through the roof in their balance sheet. That’s because they don’t change the bed every time the Pope defiles it, he just goes back to sleep as usual. Maybe they just change the sheets or something, you know, to get the smell out. But hey – if a Pope can do it and still be called a saint, surely a Donald Trump deserves a ‘boys will be boys’ get-out-of-jail-free card. At the end of the day, Trump is going to do a lot more for America than the Pope has for Catholics regardless of what they both do in their spare time. So, I think we all need to let the man do his thing and just worry about ourselves. At the end of the day, all great men have their quirks – they need them in order to stay great. So, if the man wants to watch two prostitutes pee on each other, he should. As long as he doesn’t start peeing on the American flag or people, we’re golden. Pun intended,” Conway concluded. 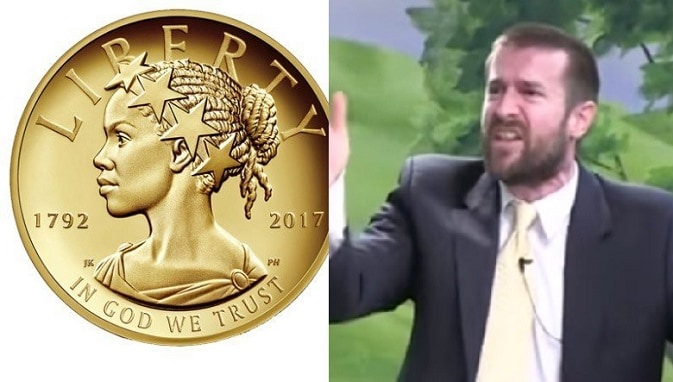 Pastor Anderson Warns: “A Black Lady Liberty Is Blasphemy And Will Cause God To Order Us To Re-Introduce Slavery”