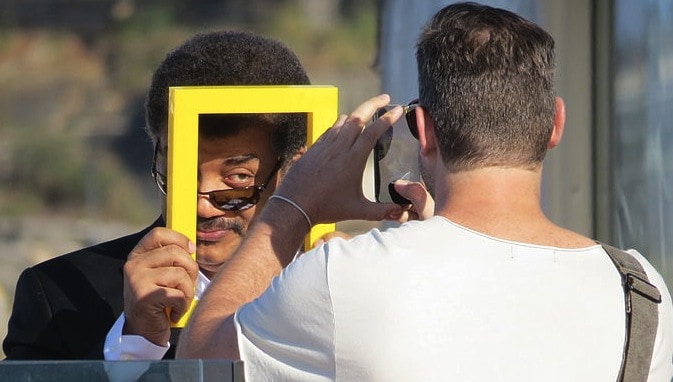 BELLFLOWER, Calif. – Christian minister and noted Creationist Ray Comfort claimed a major victory for the theory of Creationism this week when he forced Neil deGrasse Tyson, host of Fox’s “Cosmos,” to admit that the Bible is a scientific book of fact.

“You know, the word ‘science,’ it’s kind of a magical word,” said Comfort, founder of Living Waters Publications. “‘I believe in science.’ It just means knowledge, that’s all it means. There’s different areas of science, different areas of knowledge. When you say the Bible is not a science book, you’re saying it’s not a knowledge book? It tells us how God created the Earth!”

“Wow,” responded Tyson. “I never thought of it like that. You mean instead of studying the cosmos to discover observable facts which can then form the basis of informed, scientific knowledge, all we ever had to do was read a book? My entire life has been a waste.”

Comfort approached Tyson to educate the celebrated scientist after an episode of “Cosmos” stated that one could not use the Bible as a scientific source, because no scripture-based theory had ever been scientifically proven.

“I knew I had to reach out to Brother Neil and show him the error of his ways,” said Comfort, who said Tyson wasn’t qualified to determine that the Bible was not scientific because Tyson was not a theologian. “[The Bible] gives us the basis for all creation, and it passes the scientific method. It’s observable – Genesis – and testable. Evolution is not. You can’t observe something 60 million years old, but you can observe what Genesis says.

“I suddenly see how all the fossil records, all the data we’re getting from the Hubble, all the provable, scientific theories that show unequivocally that the Earth is billions of years old, all of that has been misinterpreted,” said a sheepish Tyson. “Of course dinosaurs and man lived side by side. The Bible explains that Man and dinosaur were both created on the sixth day. It would be scientifically impossible for dinosaurs to appear, flourish, and then disappear in less than a single day.

“That just doesn’t pass the smell test,” he said.

Creationist fundraiser Alan Pearson pointed out that the existence of Tyson’s show itself was, in fact, proof that science is wrong. “This is a reboot of the PBS series [“Cosmos”] in the ‘70s with Carl Sagan, who said the cosmos is all that ever was and all that ever will be,” he said. “Which is ironic, because here’s Tyson’s show, proving Sagan’s “Cosmos” was not all there ever will be.”

“If they’re wrong about their own show, how can we believe anything science tries to tell us?” agreed Comfort. “You can trust the Bible. It’s God’s word.”