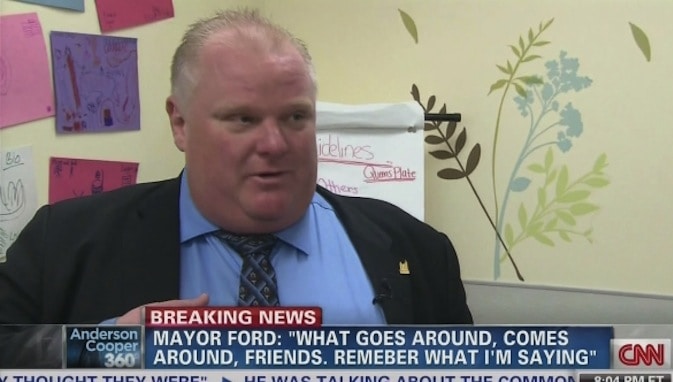 Ford’s journey from alcoholic crackhead to mayoral hopeful has inspired Torontonians who are fed up with stiff-necked politicians who carry out their civic duty with grace and dignity.

“I think Rob Ford is proof that it’s never too late to turn your life around. It shows that anybody—and I mean anybody—can become mayor of our city,” said Toronto resident Mary Beansleeve, who will cast her ballot for Ford when polls open on October 27.

Beansleeve was taken aback after being reminded that Ford has already served three-quarters of his first term as Toronto’s mayor. “Wait. You mean he’s already mayor? But didn’t he used to be a drug dealer or a murderer or something?”

Ford’s brother, who will act as his campaign manager, told reporters that Rob is ready to put his past behind him.

“My brother has learned from a lot of mistakes and faced unimaginable adversity to get to where he is today,” said Doug Ford, also apparently unaware that brother Rob’s election bid is in fact his second.

Rob himself admitted that the last few years “were a blur.”

“I remember wearing a suit a lot and shaking some hands with some important people, but I have no memory of being mayor. I think the media is after me again,” said Ford.