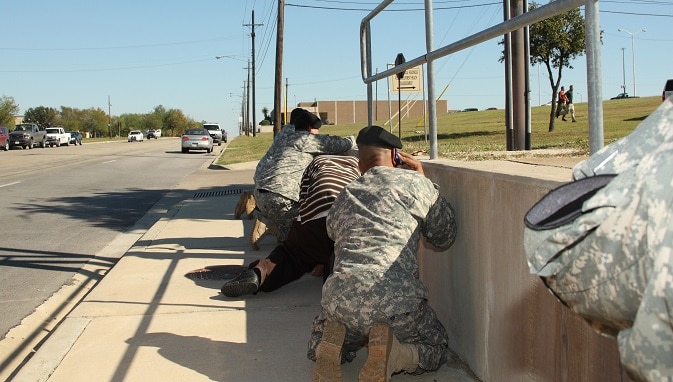 “Fox News has learned as part of its ongoing investigation of the 2009 terrorist attack at Fort Hood that the military, at least in one case, is still denying benefits for injuries sustained in the attack. Shawn Manning, who was seriously injured in the 2009 attack, told Fox News: “I think it’s almost unheard of for someone to receive the Purple Heart but not have their injuries combat-related. I know that was not what Congress intended to have happen, but it is what currently the Army has determined is going to happen.”

“On November 5, 2009, then-Staff Sgt. Manning was shot six times by Maj. Nidal Hasan. Two bullets are still in his body – one in his back, the other in his leg – and he suffers from PTSD. The 2015 defense budget – known as the National Defense Authorization Act, or NDAA – included language that meant Fort Hood victims were eligible for the Purple Heart honor because the attack was inspired by a foreign terrorist group, and not workplace violence, as the Defense Department initially labeled it.

“Manning submitted new paperwork so the Army would recognize his injuries were sustained in the line of duty. But his appeal was rejected by a physical evaluation board, apparently based on a narrow interpretation of the law.

“The April 6 letter states: “Section 571 of the 2015 National Defense Authorization Act addresses both the awarding of the Purple Heart to service members killed or wounded in attacks inspired or motivated by foreign terrorist organizations and the Defense of Freedom Medal for those members and civilians killed or wounded during the Fort Hood attack on 5 November 2009.”

” “Nowhere in the act, however, does it offer combat benefits for service members permanently disabled in attacks inspired or motivated by foreign terrorist organizations. Although subsequent legislation and guidance may change, currently, the Board has no authority to award V1/V3 (service related) designation to soldiers disabled during the Fort Hood attack.”

Texas Sen. Ted Cruz spoke to Newslo and agreed with everything Manning said. “Let me tell you something,” Cruz threatened. “If anyone wanted or still wants to refer to the Fort Hood attack as workplace violence, they might as well use the term ‘parachuting accident’ to describe 9/11. It’s pure lunacy and disrespectful to the Fort Hood victims.”

He also added: “I feel ashamed seeing how low we have sunk as a nation. At the risk of bragging, I can say I’ve sacrificed a thing or two for this great country, but that’s not nearly as much as the Fort Hood victims have lost. Just for that, they deserve our utmost respect and care for the remainder of their time.”