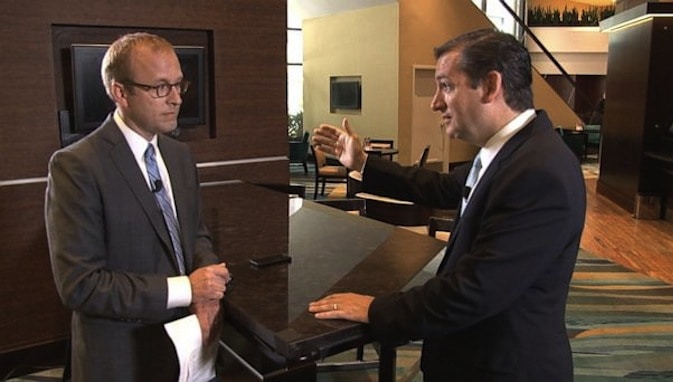 Sen. Ted Cruz continues to woo anti-gay extremists, this time appearing on a conference call for conservative activists, organized by E.W. Jackson, the former GOP nominee for lieutenant governor of Virginia. During his run for office, Jackson won notoriety for his remarks about gay people, whom he referred to in one interview with fringe anti-gay leader Peter LaBarbera as “perverted,” “degenerate,” “spiritually darkened” and “frankly very sick people psychologically, mentally and emotionally.”

LaBarbera, who was also on the same conference call, asked the Texas Republican about his stance on “the gay agenda.” Cruz, however, only answered LaBarbera’s question about the Obergefell case, railing against the landmark gay marriage decision as “one of the greatest threats to our democracy we had seen in modern times,” and went on to criticize President Obama for being “more interested in promoting homosexuality in the military than he is in defeating our enemy.”

“And here’s another fact that everybody is aware of, but nobody except me is willing to say out loud,” Cruz said almost angrily: “Our president seems to be more concerned with rare mass shootings that take place in this country from time to time than he is with the fact that the majority of Americans are under constant threat from gay rights terrorism.”

Sensing that he might have crossed the line, Cruz rephrased his statement, saying that he is “sympathetic with the victims and those who were injured in recent incidents in Colorado and elsewhere, but that such incidents cannot and must not turn the attention of the people and, more importantly, the government from the real problems that this country has.”

“My heart really goes out to the victims of mass shootings and domestic terrorism throughout the United States and I completely agree that we must take action A.S.A.P. to put a stop to that. However, I refuse to allow myself to consider such occasional incidents more important than the fact that gay and LGBT people in general are at this very moment performing acts of religious terrorism and are endangering the freedom of God-fearing, normal Americans. I will not stand for it and I urge President Obama to take action before it is too late,” the Texas Republican said.

He added: “We have not been, are not and will never be a socialist country, but from the looks of things, I believe that Christians in Russia, for example, are better off. Maybe we’d be better off with Putin, too.”