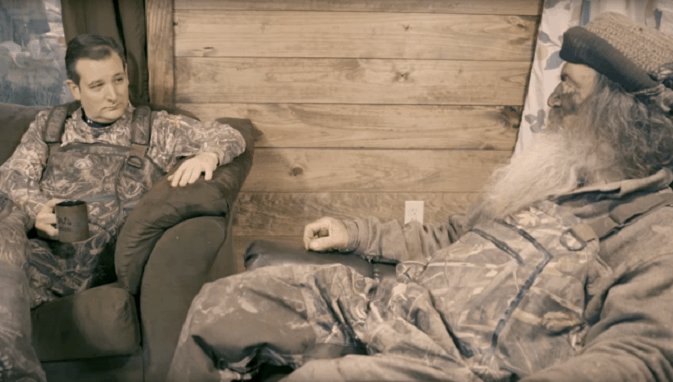 Cruz Promises To Nominate Phil Robertson As UN Amb. “To Teach Africans To Use Clean Women”

In his final campaign push before the South Carolina Republican presidential primary on Saturday, Sen. Ted Cruz once again trotted Duck Dynasty star Phil Robertson, showering the controversial reality TV star with praise. Robertson dedicated his speech at the Myrtle Beach, South Carolina, campaign event to ranting about the evils of premarital sex and how men need to marry a “clean” woman.

“You know, there’s a reason he terrifies the mainstream media,” Cruz said. “He says the things you’re not supposed to say. He actually remembers who we are as Americans and just speaks it with a joy, not with anger, not with a hatred, with a joy in who we are.”

“As a matter of fact,” Cruz added, “I’m thinking of appointing Robertson as ambassador to the United Nations in my administration. To be perfectly honest, I can’t think of a better person for the job, especially since he is not a politician. That means that he is unhindered by the guidelines of conventional diplomacy, and in my book, we need someone like that, someone who’s not afraid to speak their mind, representing our interests in the UN. And in case anyone is wondering what we’d do with Robertson in the UN, I’ll tell you right away – he could teach all those Africans about the benefits of having a clean woman, because they obviously couldn’t care less about that sort of thing. We’d be ending a huge problem that way.”

Asked to elaborate on his rhetoric, Cruz replied, “What I meant was, statistically speaking, if you look at where more than 90% of epidemics originate, it’s somewhere in Africa. And when I say that, I don’t take into consideration the conspiracy theorists who say that the Ebola epidemic and similar outbreaks were manufactured in a lab and unleashed onto the population, not even for a second. I’m talking real numbers here. Now, why do you think Africa is the staging point for all of them? It’s because of the people who live there, throughout the continent. There are a lot of diseases there because those people don’t even have the most basic hygienic requirements met, and that’s exactly the kind of environment in which viruses and diseases thrive. After all, that’s also why most Europeans and North Americans quickly become infected – they don’t have the immunity to withstand it.”

“So,” Cruz continued, “I’m seriously thinking about sending Robertson off to the UN, so he could establish some sense of order in Africa. You all heard his speech today. The man knows what he’s talking about, I dare even say he’s got a valid point. So, who better for the job than him? And another thing – because of the hygienic apocalypse that has been going on throughout Africa, we now have AIDS as a consequence. One of the most severe diseases that has plagued the human race in history today exists solely because of how dirty the peoples of Africa are. And the sad part is – they don’t even care about it. The men keep sleeping with infected women and keep spreading the virus as if it was nothing. That’s why we need someone with a firm hand to take control of things, to rule them with an iron fist and to teach them how to pick out the clean females. And I’ve got just the man for it. So, don’t go dismissing him before he’s even started the job.”