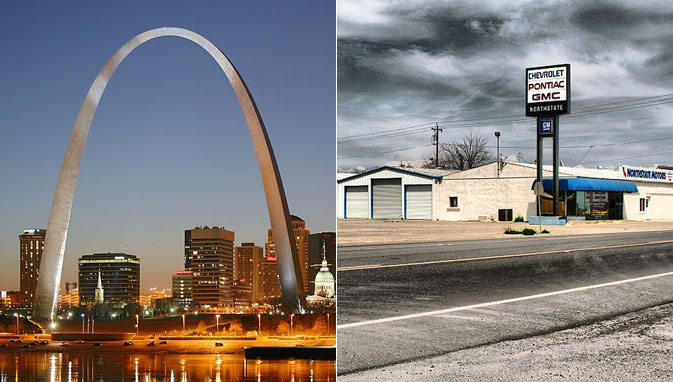 Detroit Rebrands Self as St. Louis

DETROIT — Faced with a negative reputation and bleak economic outlook, the city of Detroit is hoping to attract workers and tourists by rebranding itself as St. Louis.

Mayor Dave Bing met with city image consultants last week, who saw Detroit’s plummeting economy and population – from 1.8 million just a decade ago to a mere 700,000 today – as an insurmountable challenge. Once the heart of America’s automobile industry, the city is in a state of financial emergency, its economy now entirely dependent on Quicken Loans Inc. Mayor Bing was reportedly told that the only way to improve Detroit’s reputation was to abandon it and try to share St. Louis’s.

When people visit Detroit, we don’t want them to think ‘Hey, the homicide rate here is at its highest in two decades and 16% of murder victims are visitors,'” said image consultant Jann Seymour. “That’s old Detroit. In the new Detroit, you can look forward to touring the Gateway Arch, and stopping by the Budweiser brewery to see the famous Clydesdales – all activities which make it statistically less likely you’ll be murdered.”

In other efforts to associate itself with St. Louis, Detroit has revised all signs and billboards in the metropolitan area to vaguely suggest that it may actually be St. Louis. They have also posted signs on highways that appear to direct drivers to St. Louis, but instead lead them to Detroit. Even the few remaining police officers carry badges which read, “St. Louis Police Department,” and citizens have been urged to hang Missourri State flags out their shattered suburban windows.

Seth Farrell and Carrie Rosenberg, a young couple that arrived in Detroit during its makeover campaign, have found the strategy to be both “disingenuous and confusing.”

“We stopped by an abandoned gas station and asked this old, toothless man if we could use his phone,” said Farrell. “He told us that the only phone was in the Quicken building downtown. I guess they’re really feeling the impacts of the recession here in St. Louis.”