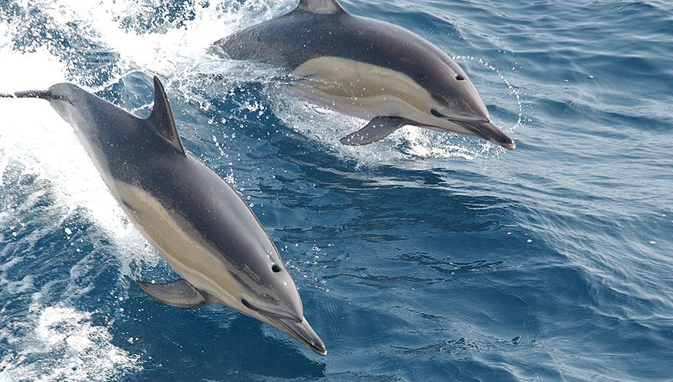 Dolphins Call Each Other by Name – Cruel, Vulgar Names

LONDON — A team from the University of St. Andrews in Scotland has confirmed what biologists long believed – that dolphins use their unique click-and-whistle form of communication to address one another by something approximating a human “name.” The research took so long, the team says, because the names are constantly changing for each animal and are, in fact, an ever-shifting series of malicious and foul epithets meant to express dominance and hurt the dolphin’s feelings.

Previous studies had found that dolphin “calls” were used frequently, and that groups were able to learn and copy the squeaking sounds. Now, after years of painful translation, professor Emmett Laig says all that copying and repeating is actually group mocking.

“For quite some time, we thought that ‘Flotsam-Brain’ was simply the most common dolphin name, followed closely by ‘Swims Like Firm Shit,’ ” said Laig. “Turns out, those aren’t names at all but insults hurled through the water on unfortunate recipients. My team was devastated.”

A typical interaction between the dolphins, considered by many to be the Earth’s most intelligent non-primate species, might go something like this: “Hey, Fin Fucker, you were late to the cod feeding again, like the stupid Turd of Neptune you are,” one might say. “Sorry, Human Dick,” will come the reply, “I was still busy fucking your mother and sister. That’s why I was all of six seconds late, you flotsam-brained douchebag with a flat head full of right angles and hard edges.”

Zoologists working on deciphering such conversations would often end up in tears, according to Laig.

“Dolphins are one of the few creatures in the world that kill for pure fun,” Laig said. “A clique of young males will also happily corner a female and gang-rape her to their four-chambered hearts’ content. It turns out that dolphins’ aggressive behavior extends to their communication, which is far more base and crude than we had imagined.”

The dolphins’ favorite insults reportedly include “Carp Cunt,” “Clogged Blowhole,” and, reserved for the lowest of the low, “Fish.”