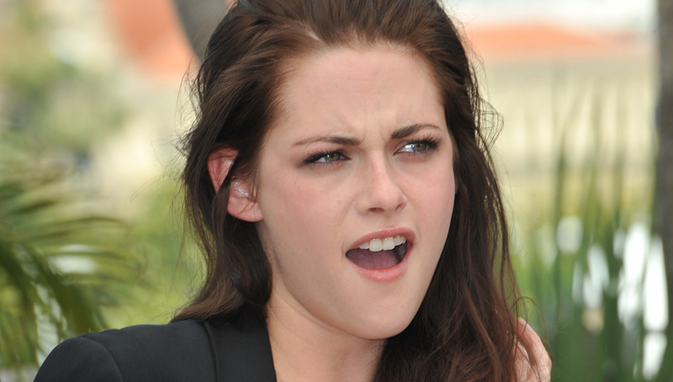 The moon was full, hanging low like ripe fruit in the violet sky, when Rupert Sanders sauntered onto the veranda with two glasses of champagne. He wore a bright yellow-checkered suit and smelled of lean brisket; upon making eye contact, I threw myself at him. We kissed and as the first stars beginning to emerge in the twilight reflected off his prescription Ray-Bans, I swooned. I took his pinky with mine and led him back inside to the party — luckily the other industry-folk and revelers were too tipsy to notice Rupert and I escape through the kitchen doors, where we made love on top of a deep fryer.

Yes, I cheated on Robert Pattinson. I cheated on him many times and in many different locations. Sometimes two locations at once, as evidenced by a particular tryst on the Arizona/Utah border. Now suddenly my reputation and public image are tarnished beyond repair — you, my darling fans, have forsaken me. You call me “home-wrecker,” “slut,” and “bad actress,” the latter of which confuses me because with Rupert I totally wasn’t acting at all. I really think he’s hot.

Now, take a deep breath as ask yourself one question: Does Kristen deserve this backlash? To be compared to some cheap call girl? As Shakespeare would say, “No.” Here I am, this beautiful young movie star with millions of dollars in the bank – I got a great house, great car, everything’s coming up roses and BAM! This older, successful man starts fawning over me. Key word: older man. Life experience, sage advice, that sort of thing. And he’s my director, so of course I want to impress him, and the teacher/student power fantasy reinvented itself in my favor. I couldn’t resist. I mean, give me a break! You’re gonna honestly tell me you wouldn’t be swept up by the searing passion? Especially if you’re into Twilight? That I just refuse to believe. God forbid anyone considers the possibility that I might have some unresolved daddy issues — no no, she’s in Hollywood, she’s gotta be perfect. Piss off. I grew up with a lot of negative attention. Rupert makes me feel appreciated.

So if you spurn me, or denounce me, then you do it out of jealousy. Monsieur Sanders, with all his debonair grace and slick charm, released me from the ponderous chain that enslaved me while dating Robert Pattinson. I’m sorry Robert, but you have to understand: I just don’t like you anymore. Our relationship is tired and your presence has become grating. At first I was turned on by your cute British accent, but then I realized there are plenty of other people with British accents and that you’re not the only one. And your torrential habit of not flushing…why isn’t that in the tabloids? I mean, what do I have to do, mail one of your turds to TMZ? It’s too much. I have to deal with playing the villain when clearly it should be the other way around.

But this letter wasn’t intended to be a tirade. Rather, it’s an exposé of my burning love affair with Rupert. My dear fans, if you are who I think you are, then you should have no trouble absorbing my steamy dalliance and perhaps rekindling your sympathies for me. I am, after all, a lady.

It wasn’t long after our tête-à-tête on the veranda – which if my memory serves me right was the wrap party for “Snow White and the Huntsman” – that Rupert and I began seeing each other almost hourly. Soon we were inseparable: our attraction was so magnetic that Rupert’s wife began asking questions when I started sleeping in their bed. At dawn we would rise together and jog down to the beach and make love on the sand, which was still cold and clammy from the night before. How I recall the tender moments we shared next to the purring Pacific, the early-morning surfers paddling out to sea, watching us tumble in the dunes while discussing possible endings for the Snow “White and the Huntsman” sequel and Immanuel Kant’s The Critique of Pure Reason.

Afterwards, we would shower in the public restrooms near Kyle’s Snack Shop, where we would always stop in and share an order of nachos. When I dribbled too much warm cheese on my chin, Rupert would lick it off, and we would laugh. Oh, how we laughed! Time seemed non-existent; it was only when Rupert checked his phone that he realized he had to take his kids to school. But most of the time we would just blow them off. We only cared for each other and we wanted to nurture that electric chemistry.

The anxiety didn’t set in until Rupert showed up one day at the house I shared with Robert. Robert was playing basketball in the garden and overheard a car idling in the driveway. I was combing my hair upstairs in my vanity, and from the window I saw their tense exchange. Robert unfastened the gate and led Rupert in. Rupert asked Robert if he was playing basketball; Robert replied with a terse, “Yes, I was playing basketball.” Rupert then propositioned Robert that they play a game of one-on-one, and the winner gets Kristen. Robert immediately accepted, provided he get to be the Miami Heat. I abandoned my combing and rushed downstairs; by the time I arrived in the garden Rupert was up 10-8 and Robert was on his last time-out. Before I could stop the madness Rupert sank a shot from long-range, and having won the game, told Robert to leave. I insisted that Robert stay, and I’ll leave. From across the garden his sullen, dejected face angered me, and I told him that Rupert won me fair and square and there’s no use harping on it. Robert began to cry. It was a pitiful display of immaturity. I quickly drove away with Rupert.

Before Rupert and I reached our favorite frozen-yogurt shop on Santa Monica Boulevard, Robert had already contacted his publicist with news of my great betrayal, and the blogosphere lit up in minutes. Rupert consoled me, told me that everything would turn out okay, but everything hasn’t turned out okay. There is talk that I will be replaced for the Snow White sequel, and while Rupert assures me that it’s probably him who will be replaced, the thought of taking direction from a different man on set still frightens me.

Robert embarked on a blitz of media and talk-show appearances, all the while refusing to speak about our relationship. Why do you think that is? Because I did nothing wrong. That’s all I can say, and all I’ve been trying to say. What I experienced with Rupert Sanders was the stuff wet dreams are made of. Robert knows that; his tail is between his legs and he’s running for shelter. In short: he’s a pussy, and that’s why it’s over. I need a real man. Not a vampire, not a werewolf, but a real man. One who can legally rent-a-car. One who, under the right circumstances, could be confused for my father. I will continue to maintain innocence as this scandal progresses, and my only wish is that all of you reading this get to experience the same flooring desire Rupert and I have for each other at one point in your poor, sad miserable lives.