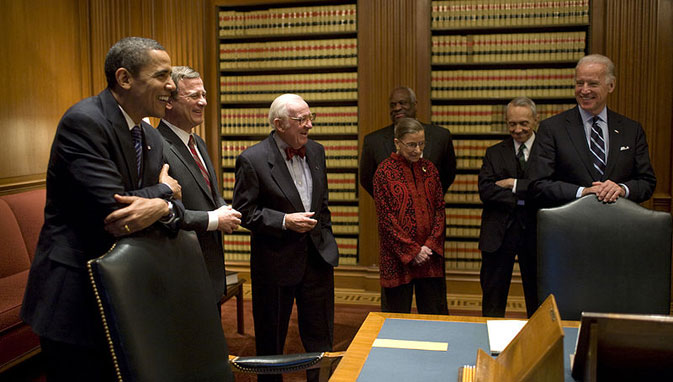 Ginsburg to Stay on Supreme Court Until It Kills Her

WASHINGTON — Supreme Court Justice Ruth Bader Ginsburg told the New York Times in an exclusive interview that she does not plan to retire before the end of Obama’s term.  According to Ginsburg, she will not be finished with her Supreme Court term “until it’s finished with me.”

“I’ve survived two bouts of cancer, but I don’t expect to survive this court,” said the 80-year-old justice. “Between their repeal of the heart of the Voting Rights Act and their attack on workplace discrimination law, I have no doubt that the conservative members of this court are attempting to run me into my grave. And I say: let them—I intend to stay on until the bitter end.”

Reactions to Ginsburg’s comments differed widely among her colleagues. Although Chief Justice John Roberts would not confirm or deny plans to off the Supreme Court’s most senior liberal by chipping away at established civil rights law, two of his fellow justices were more candid.

“To be honest, I’m surprised she’s made it this long,” said Justice Antonin Scalia. “I was sure she would have had a heart attack by now.”

“Are we trying to kill her? Oh please, what’s it to you?” said Justice Samuel Alito. “It’s not like we’re doing anything illegal. It wouldn’t be illegal if we, I don’t know, overturned Roe v. Wade and it gave her a stroke. Killing someone with court rulings is just about the most legal thing you can do.”

When asked whether the court plans to review any case that could affect Roe v. Wade, Alito laughed and told Newslo to “stay tuned.”

Despite suspecting a conspiracy against her, Ginsburg remains firm in her decision to forego retirement.

“It won’t be easy, but I’ve got to fight back against these putzes,” she said. “Even if all I do is issue dissents while Alito rolls his eyes at me. For all I care, he can just keep on rolling his eyes until I’m six feet under.