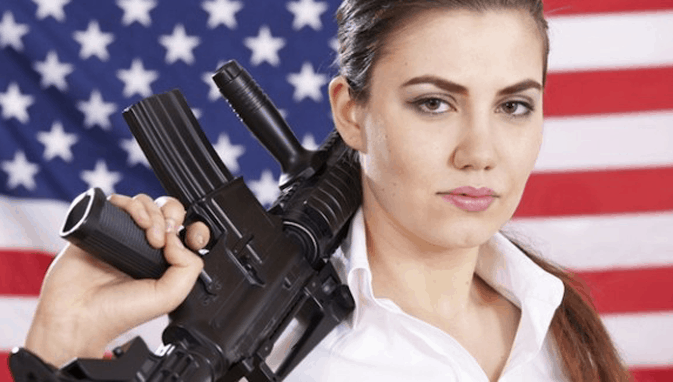 VALDOSTA, Ga.—No longer is the most dangerous thing in the local Enmark convenience store the three-alarm chili dog that has been spinning on its warmer since 1991. Thanks to the state’s new “guns everywhere” law, customers are able to grab a complimentary firearm if they come up short at the register.

The Georgia Safe Carry Protection Act came into effect last week, just in time for residents to stock up on chips, dip, and pistol grips for Independence Day. The law permits Georgia’s licensed gun owners and visitors from nearly 30 other states to carry their weapons into bars, schools, churches, and “pretty much everywhere else.”

“People come to Enmark to pick up a pack of cigarettes or a gallon of milk,” explained night manager Bob Beckhart. “Oftentimes they’re in a rush and don’t have time to put on a shirt or shoes before entering the store, let alone remember their handgun.”

Beckhart decided to offer a a give-a-gun, take-a-gun jar on the checkout counter to “handle this transition period, when our customers are still getting into the habit of always packing heat.”

Like a give-a-penny, take-a-penny jar, patrons are encouraged to drop spare guns into the jar or to grab a gun to help them settle an outstanding charge.

“It’s a real convenience,” said Bridgett Silver, 21, who was asked to buy a loaf of bread for her mother before realizing she didn’t have enough change. So she grabbed a gun from the jar, pointed in the general direction of the clerk and then walked out of the store with the bread.

“Next time I’m here,” said Silver, “I’ll be sure to pop the pistol back in the jar, so someone else could use it in a similar squeeze.”

Others come to the store prepared to give as good as they get but still appreciate the offering, nonetheless.

Ronald Williams, 62, spotted a fellow customer with a holstered weapon in Enmark on July 1—the same day the new law went into effect. After the customer refused to show Williams his identification and a firearms license, Williams drew his own gun.

No shots were fired, but Williams was arrested on a charge of disorderly conduct, a misdemeanor. Nobody, not even police officers, are allowed to demand to see a firearms permit under the new law.

“It’s plain to see the law is having its intended effect,” said Williams as he was preparing to leave the police station. He excused himself to go to the convenience store for a pack of gum, taking with him his pistol but leaving his wallet behind.