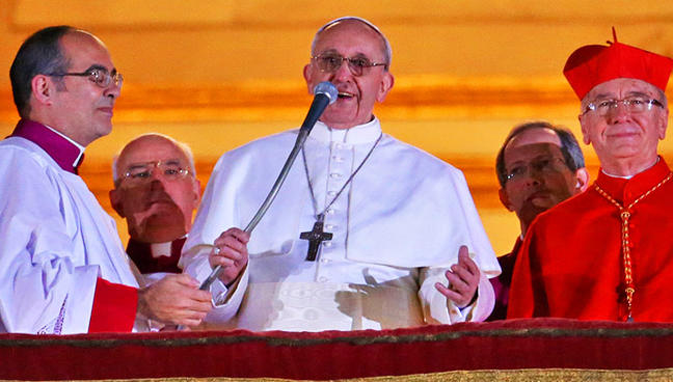 Pope Francis: “God Has Calmed Down Lately, He Is Not In Violence Mode Anymore”

Pope Francis said recently in Kenya that God’s name should never be invoked to justify violence. The pontiff expressed the importance of inter-religious dialogue during a meeting with faith leaders in Nairobi. “In an increasingly independent world, we see ever more clearly the need for inter-religious understanding, friendship and collaboration in defending the God-given dignity of individuals and peoples, and their right to live in freedom and happiness,” he remarked, according to Vatican Radio.

“Here I think of the importance of our common conviction that the God whom we seek to serve is a God of peace,” he added. “His holy Name must never be used to justify hatred and violence.” The pope described the Westgate mall and Garissa University College attacks as “barbarous.” Both attacks were carried out by Somalia’s Al Shabaab, a terrorist group linked to Al Qaeda.

However, when a reporter asked the pontiff about the fact that the Catholic Church in the early days “used God’s name to justify the evils it had done,” as well as the fact that “the Bible, the holy scripture of Christianity, is full of violence performed in the name of God,” the pope at first seemed shocked by the unexpected inquiry, then quickly pulled himself together and stuttered before coming up with a flimsy answer.

“That’s a good question,” the pontiff squeezed through his teeth, more to himself, before clearing his throat and continuing, “a question to which only He Himself knows the true answer. When it comes to us mortals, however, it can only be said that there is not one among us who has not sinned at least once in their life.”

Clearly dissatisfied with the pope’s answer, the same reporter again insisted: “Okay, but that does not answer my question – with all due respect, how can you call for stopping the use of God’s name for violence and crimes when the Catholic Church itself has been doing the same for centuries?”

Frustrated with the reporter’s unwillingness to drop the issue, Pope Francis said, “Well, you know, lately he seems to have calmed down. He’s just not in violence mode anymore, so that’s why now it’s not okay to use his name to justify our sins. In the old days, when he still thought we could be saved, he wanted to teach us a lesson by allowing us to do whatever we want. But, now that we have evolved, he finally understands that we are a lost cause. I don’t know if it’s because he’s tired or he’s just bored with everything, but he’s currently low on energy. Does that answer your question?”