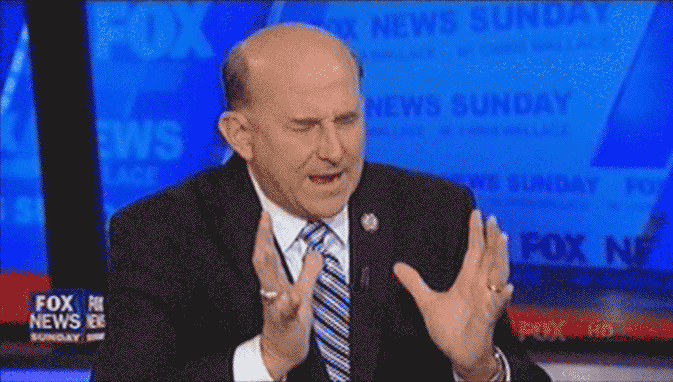 Recently, Rep. Louie Gohmert, R-Texas, put a new spin on his “gay island” story, arguing on the House floor that the push for LGBT rights is wrong because Americans would never choose to send gay couples or gay animals into space to start a new colony like in the Matt Damon movie “The Martian.” Gohmert also cited the work of Jonathan Cahn, a far-right End Times preacher who believes God is punishing America (and France) due to gay marriage with events such as the 9/11 attacks, to assert that the end is near.

“No way, no how would God-fearing, traditional Americans choose gay people as the pioneers of new colonies on other worlds, I don’t believe it. If that were to happen, I’d tear up my citizenship right in front of the Senate,” Gohmert argued. “I mean, we’ve had a lot of close calls in the past, including some downright failures as a government, but when push comes to shove, I believe we can hold it together long enough to ensure the right thing gets done. After all, we didn’t become the greatest country in the world by taking things lightly.”

He continued, “That is why I believe it is once again time for us to show how simultaneously strong and understanding we can be as a nation. Instead of sending gay people to space, I believe we need to demonstrate our compassion. And since we’re still suffering the aftermath of the 2008 global financial crisis, rounding up all the gay people in the country and sending them to their own island would be too expensive. That’s why I’ve come up with another idea that I believe is much more pragmatic.”

“We need to establish gay colonies in every state, so that we wouldn’t have to transport gays from all across the country to one location. Instead, let’s minimize logistics and transportation costs by only moving gay people from their homes to a colony in their respective state. For instance, gay people living in Sacramento, Los Angeles and San Diego would move to the California colony. Similarly, folks from Portland and Seattle would be relocated to the Oregon colony and so on. That’s much more practical and less of a dramatic change, which shows that we’re thinking about how those poor, sick people feel,” he argued.

Gohmert also said, “At the same time, the fact that we’ll be clearing out the remainder of the country that way will be an added bonus. In the meantime, colonies will be able to have their own TV programs, access to strictly gay porn sites, with the occasional, scheduled visits from relatives and friends. On the other hand, our schools and other public institutions would be free of homosexual influences, which will help establish a renewed sense of gender identification in our children. Because, let’s face it – they won’t have to be traumatized by seeing two of their male teachers sucking faces during recess anymore. And that’s always a good thing.”

“And before anybody accuses me of sounding like a Nazi,” he added, “let me just say that my idea couldn’t be farther from the notion of World War II concentration camps. Because, I don’t recall Germans allowing American POWs to have visits from prominent entertainers. And that’s exactly what we’re planning on allowing to these people. Along with regular psych checkups, that is. I mean, I’m no fan of Elton John, but if he’s the thing that helps gay colonies make it, he’s my new best friend. In fact, I think he’d look absolutely fabulous wearing a colony uniform.”