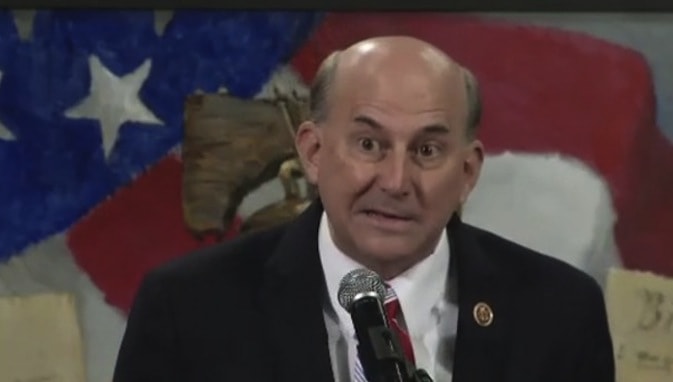 Gohmert: “If You Can’t Use English, You Can’t Vote In The Country That Invented It”

The Family Research Council’s Tony Perkins interviewed Rep. Louie Gohmert recently about reports, which turned out to be erroneous, that the man who shot five people in a Washington state mall last weekend had voted three times despite not being a citizen. Gohmert, a Texas Republican, then linked the story to efforts to pass criminal justice reform legislation, claiming that Democrats are relying on the votes of “felons,” “people that can’t speak English,” and undocumented immigrants in order to win elections.

“And while they’re there,” he continued, “why don’t they just flat out allow the entire world to vote via the Internet in the United States presidential election? At the rate they’re going, that sure looks like their end game. All the requirements for somebody to actually be entitled to vote in this country went down the drain the moment Democrats started importing foreign citizens for the purpose of influencing a number of things they feared traditional, God-fearing Americans would never allow. Just look at what happened with same-sex marriage, that’s a great example.”

Gohmert went on to argue that “non-fluent-English-speaking” people currently residing in the United States, regardless of whether they’re American citizens or not, “should not be allowed to vote.” “I believe that to be the essential pre-requisite for a citizen of this country that wants to have a say in his own future,” he said. “Bottom line, if you’re incapable of using even the most basic level of the English language, you should not be able to vote in a country that invented it. Well, its purest, most accurate form, anyway.”

“I’m well aware that the English language also existed in England some time ago, but that version sounds nothing like what we have in America today. And even though some would like to call the language spoken here today American, I think we should still call it English, with an emphasis on the fact that we should be credited with creating a language that is today also spoken in countless other countries of the world. It was the Republicans who simplified it to the point where even an idiot can learn to speak it in as little as three months. If it were up to the Democrats, we’d all be speaking French right now,” Gohmert said, causing Perkins to laugh.

He added, “So, if you want to be an American citizen and vote, you have to be using our version of English at least once a day. And by the way, now that I mentioned French – I suddenly realized why so many folks from Louisiana tend to vote for Democrats. It proves what I’ve been saying – chances are that, if you’re not using English in this country as your everyday language, you’re probably going to vote for Hillary Clinton. But that’s okay. And I say that because of two reasons: one; you’re not going to be able to vote anymore pretty soon, and two; there are more traditional Americans in this country than there are imported foreign voters. So, good luck, Hillary.”

“And another thing,” Gohmert added. “Barack Obama’s first language wasn’t English. So, that’s how far Democrats are willing to go in order to quench their thirst for power. And considering that Hillary Clinton’s foundation has accepted more lobby money from rich ragheads than all of Europe from Nazi Germany for post-WWII reparations, I think you know which foreign language is going to be taught in American schools pretty soon. Just saying.”