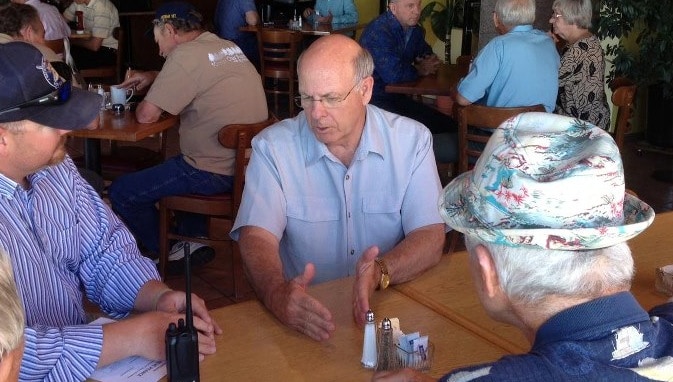 WASHINGTON – Representative Steve Pearce (R-NM) is under fire over statements made in his new memoir, “Just Fly the Plane, Stupid!” In his book, he claims that couples should follow the Biblical rule that wives “voluntarily submit” to their husbands, specifically that they should be ready to supply oral sex on demand.

“The wife is to voluntarily submit, just as the husband is to lovingly lead and sacrifice,” he writes, citing a passage in the Book of Ephesians. “The husband’s part is to show up during the times of deep stress, take the leadership role and be accountable for the outcome, blaming no one else. And the wife’s part is to provide oral sex.”

Pearce states several times in the controversial chapter that submission doesn’t mean inferiority, nor does it mean his wife does not have a say in major decisions. “I take the Bible passage to simply mean that when I give her that look, she knows to bring out the knee pads,” he explains.

“The principle is among the most controversial of all directives coming from the Bible,” he writes in the book. “Many of my friends dealt with the directive by ignoring it… Or, well, their wives did.”

Many GOP leaders are distancing themselves from Pearce’s comments as the party attempts to narrow the ‘Gender Gap’ which sees females voting more and more for Democratic candidates.

“Representative Pearce’s do not represent the Republican Party,” said House Speaker John Boehner. “Although we all appreciated the copies of the Book of Ephesians he handed out during our last caucus meeting. I’m looking forward to giving it to my wife.”