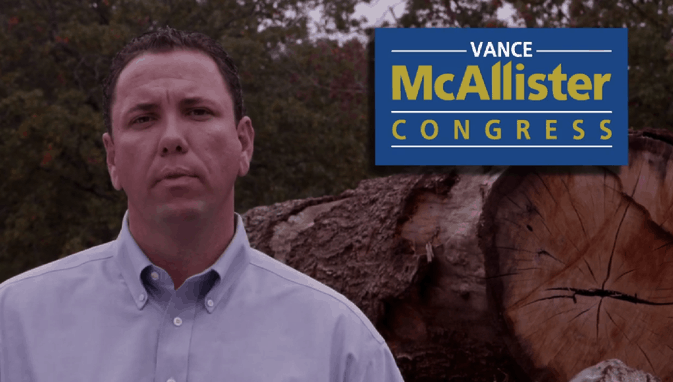 WASHINGTON – Prominent Republicans are rushing to the defense of Representative Vance McAllister (R-La.) this week after the freshman congressman was caught on tape kissing one of his female staffers. While many GOP heavyweights admit that his actions were “probably wrong,” his most vocal defenders are insisting that McAllister, who has been married for 16 years, “deserves a pass on this episode of infidelity” because he has “worked so hard to defend the sanctity of marriage from the gays’ relentless onslaught.”

“Like it or not, Vance has earned this one,” said House Majority Whip Kevin McCarthy (R-Ca.). “He’s been one of our most tireless warriors in the fight to keep marriage straight and sanctified. If he wants to shove his tongue down a throat that isn’t his wife’s—well, that’s his reward.”

McAllister, who was elected to Congress in November, centered his campaign around his conservative Christian values, and often used his marriage to his wife, Kelly, as proof of his trustworthiness and fitness for office. But Republicans like Louis Gohmert say that McAllister’s extramarital activities are not necessarily evidence of hypocrisy.

“Regular people have no idea how exhausting it is, defending the sanctity of marriage,” Gohmert said recently. “Sometimes you gotta blow off a little steam. This little incident is nothing when you think about his long record of sticking up for marriage.”

McAllister attracted headlines this January when he invited Willie Robertson, star of the popular reality TV show “Duck Dynasty,” to be his guest to President Obama’s State of the Union Address. At the time, Robertson’s father, Phil, was suspended from appearing on the show after making what many called homophobic comments. McAllister’s invitation was widely seen as an endorsement of Phil Robertson’s views.

“Really, Vance was probably just warming himself up for his wife,” argued House Majority Leader Eric Cantor. “He knows better than most that homosexuals are plotting to destroy marriage all the time, and so he’s got to put in a really good showing in the bedroom, just to keep God’s will going.”

McAllister has apologized for his actions and asked his wife, family, constituents and God for forgiveness. “I realize that I’ve probably used up most of my free pass on this one,” McAllister said Tuesday. “I’m going to keep in in my pants until 2015 at the earliest.”