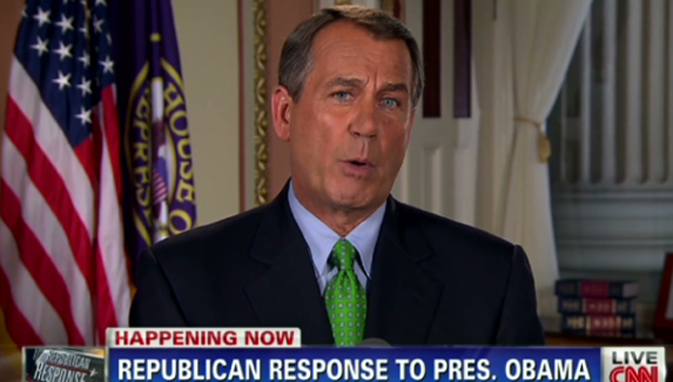 NEW YORK — New Yorkers buying health insurance for themselves will see their premiums drop by about 50% next year, according to New York Governor Andrew Cuomo. The sharp decrease is being attributed to the Affordable Care Act – a.k.a. the ACA or Obamacare – largely because of the online purchasing exchanges the law creates.

Republican House Speaker John Boehner immediately proclaimed that the precipitous drop in premiums is “proof that Obamacare is a total failure.”

Opponents of Obamacare have long predicted that the plan would sharply raise the cost of health care. However, a number of experts are saying that New Yorkers who now pay $1,000 or more per month will be able to shop around for alternative plans, which cost as little as $308 per month. Federal subsidies will help to further rein in costs.

When asked why, then, Republicans are calling a sharp plummet in rates evidence of the ACA’s failure, Boehner said, “I’ll have to get back to you on that.”

He then excused himself to join a vote by House Republicans to overturn the ACA for the 38th time.

Senate Minority Leader Mitch McConnell, who famously said during Obama’s first term that his main goal was to make him a one-term president, said: “By definition everything that Obama does is bad. I’m pretty sure we’ve trashed his ending the war in Iraq, withdrawal of troops from Afghanistan, and even the assassination of Osama Bin Laden. Some aspects of the president’s agenda will take more time to discredit than others, but we’ll get there.”

McConnell dismissed a reporter’s suggestion that Republicans should wait until they know why exactly this is bad news before dubbing it “naïve” and seeking its destruction.

“This just shows you that the Democrats don’t know anything about winning the news cycle. By immediately blasting the plan one day, and then giving a reason for doing so the next, we can spread our criticism out over two cycles. Then we also give a heads up to our comrades at Fox News, as well as to all our right-wing radio talk show host friends. It’s imperative we let them know that we’re not going to let Obama pull the wool over anyone’s eyes by pretending that this is good news..

“We’ve got some of our most rabid minds working right this moment trying to figure out why this is incontrovertible evidence that Obamacare is a disaster for consumers. But trust us, it is.”