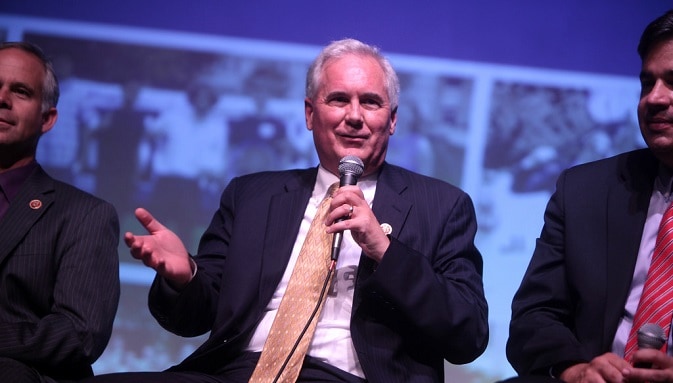 GOP Senator Suggests $1/Hour Min. Wage For Women: “They Can Use Their Physical Advantages If They Want More”

California Republican Rep. Tom McClintock recently cited $1/hour jobs and the “opportunity to negotiate” as reasons that women are better off without the protection of equal pay laws. At a debate last week between McClintock and Dr. Bob Derlet, a Sonora Democrat, one voter brought up the topic of equal pay for women, and asked the Republican incumbent why his daughter should make less than his son.

“Simply put, because your daughter, like all women in the world, has several physical advantages over your son and other men that she can use for negotiation,” was McClintock’s rather snappy answer. The California senator argued that women “don’t need” salaries equal to that of men simply because they are women. “Nature has already created an unbalance between the sexes; it’s up to us to remedy that,” he argued.

Though, McClintock corrected himself immediately after. “However, I do not mean to imply that Mother Nature doesn’t know what it’s doing; I’m just saying, you know, it’s not a fair game. Women have plenty of physical attributes they can use to get ahead in life, while men don’t. If you add to that the fact that the majority of job offers and important job positions are held by men, that further decreases the chances of straight men using their looks to get good jobs. Bottom line, unless you’re a guy and your boss is gay, you’re in a bad situation.”

“And when you look at it that way, it makes perfect sense why men should have a higher minimum wage than women,” he continued. “When nature creates an unbalance, like it has with breasts and curves and other features of the female body, we should be civilized enough to realize that and then fix it. And that’s exactly what the $1 minimum wage for women aims to do. Not only will it help men feel better about themselves, but it will also push women out of their comfort zone and into a situation where they’ll have to practice their ‘negotiation’ skills whether they’d like to or not.”

His tone then changed from an explanatory one to an almost threatening connotation: “And let me tell you something else – we’re hardly discovering hot water here. Millions of women have already mastered the art of flirting their way up the corporate food chain, and nobody’s complaining. And that’s just not fair – I say this as a guy – it’s not fair that they get to do that, that nature allows them to. So, again, we’re going to fix that and this is how we’re going to do it. So, I don’t want to hear any more talk about equal pay rights. Because a pre-requisite for that are equal physique rights. And since we can’t change our DNA, not yet at least, we’re stuck with this.”

“At the end of the day, they’re getting off easy with just a $1 minimum wage. If it were up to me, I’d lower it all the way to 50 cents and then let them really work for it. And as for ugly women who don’t have enough sex appeal, well, they’ll just have to start working out and taking better care of themselves. Because, I’m a firm believer that there’s no such thing as an ugly woman; just a woman who hasn’t yet learned to take care of herself. So, there you have it, Sir – this is a solution that has far greater positive consequences than negative ones. And now, if you’ll excuse me, I’m supposed to interview this hot new Latina intern and you know how feisty Latinas can get. Wish me luck,” he concluded.