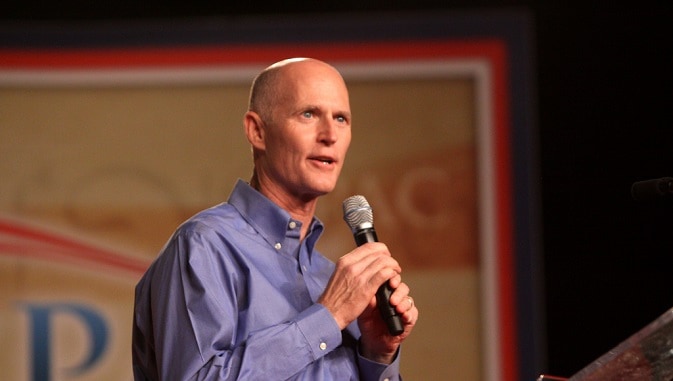 Gov. Scott: “Hurricane Matthew Might Kill You, But You Deserve It If You’re One Of Those Climate Change Believer As*holes”

Florida Gov. Rick Scott is freaking out over the potentially devastating Hurricane Matthew – but he has banned state workers from discussing the climate change that may have made the storm so strong. The category 4 hurricane is expected to make landfall late Thursday between West Palm Beach and Cape Canaveral, with sustained winds up to 140 mph, and could reach category 5 strength. “This is going to kill people,” Scott said, urging residents to evacuate or prepare at least a three-day supply of food, water and medicine. “Charge your phone, do not surf, do not go to the beach. This will kill you.”

Speaking with ABC News, Scott also argued that citizens must prepare all vital supplies for a minimum three days time, as well as evacuate the targeted area immediately if they have elsewhere to go. However, he also had a rather strange message for those he referred to as “climate change believer as*holes.” “Although Matthew was officially the strongest hurricane to hit Haiti in a generation, I’m pretty positive that Haitians aren’t big fans of the climate change theory. In other words, I don’t think many people died over there precisely because they don’t buy that whole ‘we caused this’ crap. And other than material damage, they didn’t do too bad,” Scott said.

“However, if you’re an American citizen and you live in the Florida or Georgia area, which is to say, you’re on Matthew’s pathway, I’m sorry to have to say this, but you deserve to die,” he said flat out on national TV. “I know how it sounds, I’m well aware of it and you can get mad all you want, but that’s just the way it is. And that’s the God’s honest truth. Because, if you buy for a second that the human race could have caused such a destructive force of nature, you’re obviously dumb enough to believe climate change is real and you serve no other purpose than to merely waste the oxygen all of us breathe.”

He continued, “So, Hurricane Matthew is on its way and when it does hit, it’s going to hit hard. And all of you climate change believer as*holes can sit back, relax and wait for it to come and swoop you up and then toss you some place 200 miles away because it ‘wants revenge’ on its creators, like a son hates his father for creating him.” Scott also argued that “the rest of us, normal people” are going to take shelter and “bow down our heads and wait out Mother Nature’s wrath upon the human race,” but that those who believe climate change is real can repent for their sins by meeting their maker at the hand of their own creation.

“How someone can blame the human race for something so idiotic and out of our reach is just beyond me,” the governor said. “You know, sometimes I think that climate change believers are a special kind of people, you know, the ones we need to institutionalize. Next thing you know, they’ll be on about how all of the forests on our planet are dying out and how we need to stop deforestation. And then what? Volcanoes are going to start acting up, we’re going to keep having wildfires, our cities will drown? I really think those people admire science-fiction novels the way normal people admire the Bible,” he concluded.