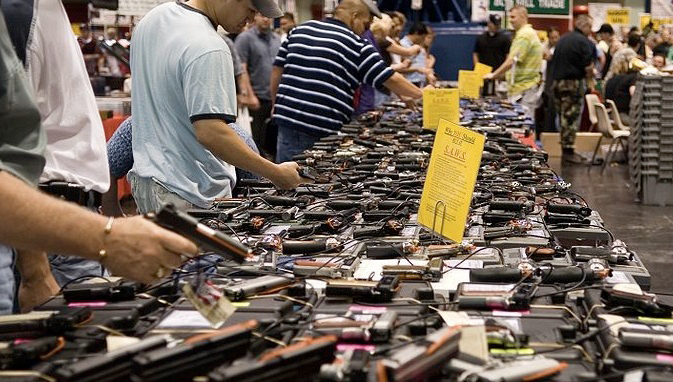 PINELLAS, Fla. — A group of friendly gun owners living in the gated community of Kenilworth Estates have formed a committee that welcomes new neighbors to the development with a gift basket that contains local maps, coupons to nearby restaurants, and semi-automatic weapons. The program, called the Welcome Magnum Committee, has proven quite popular, and has been gaining attention nationally.

“The name is just tongue in cheek,” said the program’s founder Roger Weinhart. “Obviously, we’re not going to go around handing out Magnums. That would be crazy, because those guns are really expensive, and we’re saving up to buy a tank. No, we just hand out AK-47’s, the Chinese-made ones. One for every member of the family.”

“The Welcome Magnum Committee were the first set of faces that came to our door,” said new resident Pamela Cousins, 42. “They were armed to the teeth and insisted upon coming in to talk to me about the Second Amendment. I didn’t feel like I had the choice to say no.”   Added Cousins: “I was frightened for my life and the lives of my children.”

Weinhart says he came up with the idea after relocating to the community and noticing on a map that there was an inner city less than 50 miles away. “Nobody even warned me. Can you imagine that? There I was, a sitting duck, and nobody even gave me a heads up. I just don’t want anyone else to live with that kind of fear.”

Weinhart pointed to the wealthy, upper-class neighborhood’s low crime rates as proof of the program’s success. “Because of Welcome Magnum, violent crime is virtually non-existent, Mr. Weinhart asserted. “You just don’t ever hear sirens around Kenilworth Estates. Unless it’s the ambulance coming. Some of our newer members are still learning proper gun safety, especially the little ones.”

The program has attracted the attention of NRA honcho Wayne LaPierre, who is calling upon members of his organization to follow suit. “The NRA won’t rest until there is a Welcome Magnum program in every neighborhood, school, public library, restaurant, and hospital in the nation.”