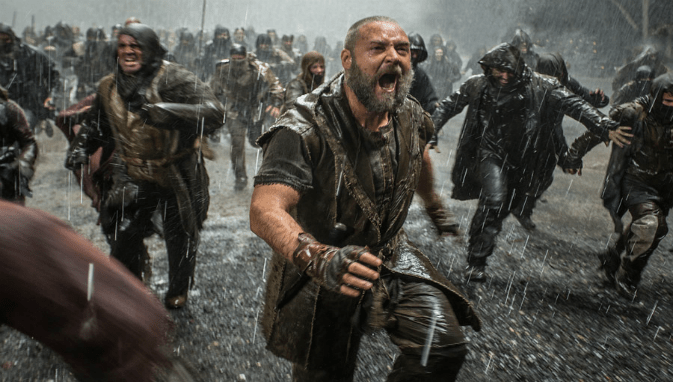 LOS ANGELES — Biblical blockbuster “Noah” opens in theaters at the end of this month, but the Darren Aronofsky film is already generating plenty of headlines. Ads and trailers for the film will include a disclaimer, described by Paramount as an “explanatory message.”

“DISCLAIMER: All characters appearing in this work are fictitious. Any resemblance to real persons, living, or dead, is purely coincidental. Paramount Pictures strongly discourages anyone from worshipping of the God of Abraham, or participating in organized religion.”

The disclaimer is sure to rile Biblical literalists upset over the film, which has already been banned in several countries in the Middle East. Paramount executive Peter Moore said in an interview Wednesday that the motivation behind the disclaimer was done for moral, not legal, concerns.

“Paramount is operating under the same logic the producers of “Jackass” use when they put a disclaimer at the beginning of their shows and movies,” Moore said, adding that he “wouldn’t be able to sleep at night” if even one person converted to fundamentalist Christianity because of the film. “We all like to be entertained, but you have to remind people that these behaviors are dangerous, and just because you see them on a screen doesn’t mean it’s a good idea to try them out yourself.”

“I mean, the Biblical Noah lived to be over 500 years old. I’m not in the business of spreading fictions, damn it. I’m a Hollywood studio executive,” Moore exclaimed.

Creationist Ken Ham has already voiced his disapproval over the film, which he believes does not adhere closely enough to the Biblical version, but now the evangelical leader is calling for all-out boycott of the film after learning about the disclaimer.

“It’s not surprising the godless liberals of Hollywood were willing to exploit the Gospel for their unholy ends, but they’ve crossed a line now,” Ham told reporters Tuesday. “In a society run amok with political correctness, I guess God killing the entire human race via drowning except for one family is no longer a state-approved message.”

While the move is sure to provoke outrage across the country, Paramount will likely be spared the controversy that followed Michael Bay’s 2001 film Pearl Harbor, which carried a disclaimer asserting FDR knew about the Japanese attack in advance.