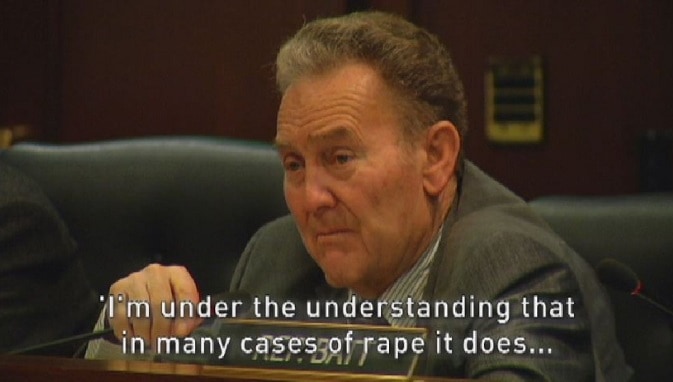 Idaho State Rep.: “If Women Get Pregnant After Rape, That Means They Must Have Enjoyed It”

Another Republican lawmaker suggested women and girls are unlikely to become pregnant from rape or incest. Idaho State Rep. Pete Nielson (R-Mountain Home) spoke up during a legislative hearing Thursday to decide whether abortion providers should be required to give patients a list of facilities that offer free ultrasounds, reported The Spokesman-Review. Nielson expressed his doubts that post-rape pregnancies were medically possible.

“Now, I’m of the understanding that in many cases of rape it does not involve any pregnancy because of the trauma of the incident,” Nielson said. “Therefore, it is a logical conclusion that any woman who got pregnant after such a despicable and gruesome act must have, in fact, enjoyed it even on a small scale, which eventually led to the obvious consequences. Now, I don’t have a problem with women who make a mistake and then regret it, but I do mind when people let something happen, pretend that it’s disgusting, and then it turns out they lied.”

Nielson also added that “biology and Mother Nature aren’t stupid,” and that “there’s a reason why the human organism is made up of both the physical and the spiritual.” “When you have something else – let’s take the opposite for example – when you have a person who finds out they have cancer, and if that person falls into desperation and refuses chemotherapy and chooses to die, that’s exactly what happens eventually. But if that person overcomes the initial shock and decides to fight the disease with everything they’ve got, we have many recorded cases of people beating cancer simply by living a happier and healthier life. And that proves the power that one’s thoughts have over the body, the physical aspect.”

“It’s the same with pregnancy,” he also opined. “You have couples that have been trying to have a baby for years, and have been unsuccessful, despite the fact that they’re both perfectly healthy and fertile. That also proves the fact that the brain is where it all starts and that the brain and our emotions affect our bodies. So, when a woman gets raped, if she experiences that as a trauma, she doesn’t get pregnant. And you can say what you want, but when she does get pregnant after such a crime, that undoubtedly means that she liked it at some point, regardless of how strange or unbelievable that sounds. Medicine and biology don’t lie. They just don’t.”