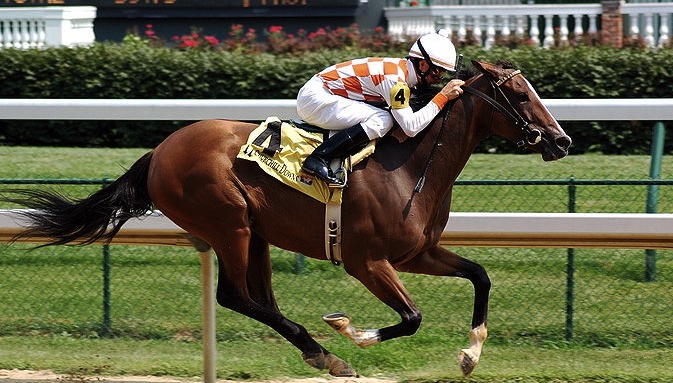 “He’d been antsy all day after Collins’ announcement. I could tell something was bothering him,” said Verrazano’s trainer, Todd A. Pletcher. “When he finally told me that he was gay, I could see the relief flood through him. There was an extra spring in his step and it was all I could do not to cry tears of joy. He’d been carrying this weight in his heart for so long, but thanks to Jason, Verrazano found the courage to reveal his true self.”

Verrazano spent the first two years of his life hiding the truth from everyone, especially his father, More Than Ready, who placed fourth at the Kentucky Derby in 2000, and his step-brother El Padrino, who placed 13th in last year’s Derby. The secret shame he felt in remaining in the stable’s closet all his life made him emotionally unable to race as a two-year-old. When he races in the Kentucky Derby on May 4, he will try to be the first horse to win the Derby without racing as a two-year-old since 1882’s Apollo.

When he finally began racing this year, he was dominant, with an aggression jockey John Velazquez now attributes to the inner turmoil over his sexuality. “I’ve ridden a lot of winners in my day,” said the Hall of Fame jockey. “But Verrazano was always different. Determined. Unrelenting. Out to prove something. Now that I know what he’s been dealing with, it makes perfect sense and I am even more honored to straddle him.”

Verrazano is undefeated in his young career, winning all four races he’s entered in inspiring fashion, especially the March 9 Tampa Bay Derby, which he won by three lengths.

“[Second place finisher] Java’s War said something to him right at the gate that really ignited his fuse,” said Velazquez. “Something about being a sissy boy. It didn’t make any sense to me at the time, but now I wonder if somehow he knew Verrazano’s secret and was trying to intimidate him. Whatever it was, it obviously didn’t work. He ate Verrazano’s dust.”

The overly-humble Verrazano isn’t expecting the same outpouring of support that has followed Jason Collins’ revelation- including a call from President Obama and positive tweets from the likes of Kobe Bryant, Spike Lee, The Rock, and former President Bill Clinton. For the probably Kentucky Derby favorite, coming out was about being true to who he is and quieting the inner demons within.

For most of the racing world, Verrazano’s announcement, while stunning, is a non-starter. “Who he loves in his spare time is his own business,” said Michael Tabor, co-owner of the international Coolmore Stud stallion conglomerate which purchased a half-interest stake in Verrazano earlier this year. “Right now we’re focusing on May 4 and winning the Kentucky Derby. Then he’ll be a prize stud and spend the rest of his life impregnating mares for millions a pop.”

“If he needs a good-looking stallion in the next stall to get him in the mood before he can get to work, that’s easy enough to arrange,” continued Tabor. “He just has to perform. He doesn’t have to like it.”