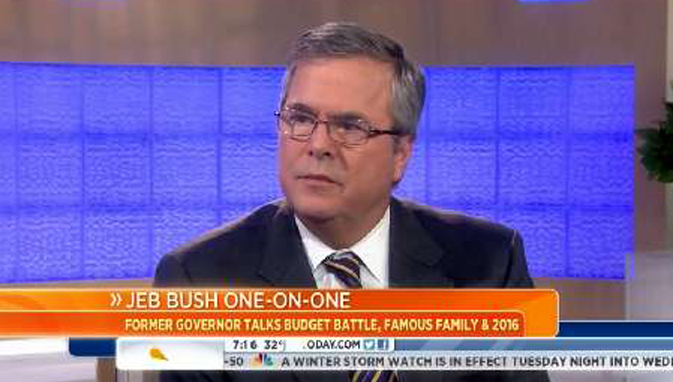 TALLAHASSEE — In a guest appearance on MSNBC’s Morning Joe, former Florida Governor Jeb Bush requested Sparknotes for Immigration Wars, a book he co-authored with Clint Bolick, in order to determine his position on illegal immigration as soon as possible.

Bush is known as a relatively moderate Republican, owing to his outreach towards the Hispanic community and stated belief that illegal immigrants should be offered a path to citizenship, a position he walked back from shortly after learning that his own book criticized the same very idea. Bush’s change of heart came at an inopportune time politically: the book was written last year, when the Republican Party considered offering illegal immigrants a path to citizenship to be an act of treason. Since then, many Republicans, including Marco Rubio, the GOP’s Hispanic savior, have come out in support of the policy.

“Of course I read it. I did write half the thing,” Bush said on-air while stalling for time as a personal assistant hurried to print out copies of the Sparknotes for Immigration Wars. “Just not the half about my beliefs regarding immigration. But I read the other half, which I actually did write. Wait, no. That doesn’t make sense either. Strike that. Go to commercial.”

After perusing the “Overview” and “Important Quotations” sections of Sparknotes during a commercial break, Bush confidently stated: “I am for a path to citizenship as long as it doesn’t incentivize illegal immigration, which I believe is impossible. I therefore oppose a path to citizenship. And that has been my stated position for literal hours, ever since the publication of my book earlier today.”

In the middle of Bush’s statement, other Republicans competing for the 2016 presidential nomination shifted their views on immigration once again, with Rubio and other conservatives advocating that illegal immigrants fight each other to the death in a televised sporting event, with the winner being granted citizenship. When informed of this shift in the GOP landscape, Bush sighed and requested the Sparknotes for The Hunger Games.