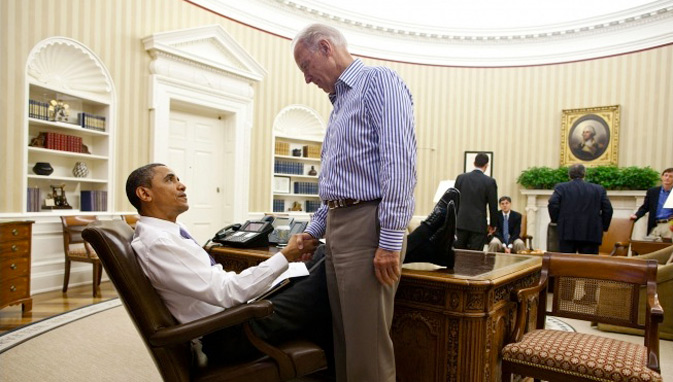 WASHINGTON — Vice President Joe Biden knows his way around the capital city well enough to see that the Ready for Hillary wave is swamping his ambitions for higher office. Rather than take a back seat, Biden has decided to leave the administration to become a captain of industry.

“Is that the vice president?” asked Maria Felt, a 42-year-old tourist from Nebraska, as she stood in awe of the traffic jam caused by Biden’s procession down Pennsylvania Avenue. Sure enough, it was Biden wearing his trademark grin, but his armored limousine had been replaced by a brightly colored amphibious tour bus.

“Quack for us,” Felt’s 10-year-old daughter implored. Biden, the newly installed executive vice president of D.C. Duck Tours, happily obliged. Freed from the restraints of political handlers, the lifejacketed septuagenarian offered to give both mother and daughter a “big, wet smooch.”

A longtime advocate for public transportation, Biden decided to take the helm of the tour company after political strategist and Obama advisor David Plouffe announced he would become Uber’s senior vice president of policy and strategy.

Uber, a ridesharing start-up, hopes it will benefit from Plouffe’s data-crunching abilities and political acumen to fight the taxi lobby and other regulatory roadblocks to the company’s rapid expansion.

Biden, for his part, hopes to “make Washington more accessible to average folk” by guiding them down K Street and the Potomac River with his avuncular—if occasionally handsy and rambling—approach.

“The power I had as ‘veep’ is nothing compared to the V-8 turbocharged Cummings VTA 903 diesel engine inside this baby,” purred Biden as he raised the gangplank and cracked open another beer.

Plouffe congratulated the outgoing vice president on his new undertaking and suggested he call Uber, should he ever need a sober driver. “Uber is making transportation safer,” claimed Plouffe. “It’s providing jobs; it’s cutting down on drunk and distracted driving. I think the mission is really important.”

First lady Michelle Obama also sees promise in Biden’s stewardship. “While Barack and I are sad to see Joe leave the administration, we’re thrilled that he’s encouraging more Americans to ‘Get Moving’ and visit their nation’s capital.”

The first lady’s office indicated she would also like to make clear that, “If the business venture doesn’t work out for some reason, Biden will have to find somewhere else to crash because the Lincoln Bedroom is under renovation for the foreseeable future.”