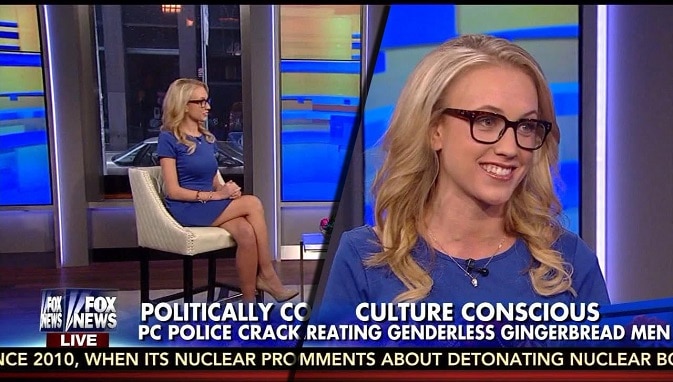 Appearing on Fox & Friends on Saturday, a National Review columnist agreed with the weekend hosts that new rules established by Twitter to curb harassment and abuse could be used to silence conservatives because they are not limited to going after terrorist groups like ISIS. According to co-host Clayton Morris, Twitter’s rules targeting “abuse or harassment” on the social media platform are vague and lack any mention of the terrorist group.

“I completely agree,” Timpf said. “After all, with the way the rules have been made, the left only needs to report a conservative or two, and they’ll end up being kicked off of Twitter almost automatically. There is just no mention of the terrorist organization anywhere, and that’s just the half of it. The wording is so vague that virtually anyone could be targeted by it.”

She also added that “it is more than clear now that ISIS was actually created by Obama for this specific purpose. If there was ever any doubt about this, there’s no more of it now.” And when Morris asked Timpf “whether it was actually plausible that the President of the United States created an entire terrorist organization just to get a social network to give him the tools to shut down conservative opposition,” Timpf responded, “Well, is Donald Trump going to be the next President? Of course the answer is yes.”

She also said: “Look, it might sound a bit far-fetched to some of you, but it’s really not when you take into account the fact that our president has a history of aiding and abetting terrorists in order to stay in power and silence the opposition, which are, in this case, the conservatives. Sure, he could have done it much more easily, but the problem is, any other way besides this one would be blatantly obvious. It’s the perfect disguise – do something so crazy that no one in their right mind would believe you were responsible for it. That’s been his strategy ever since he became president, and you know, why fix it if it ain’t broke?”

“Besides,” she added, “permanently beating the opposition is the number one preoccupation of every politician. Obama just figured out how to do that in a sustainable way, that’s why it had to be so complicated. We’re just lucky he didn’t choose Facebook as his pilot project, I hear many more conservatives are fans of Zuckerberg. At least that would explain all those millions he supposedly donated to charity.”