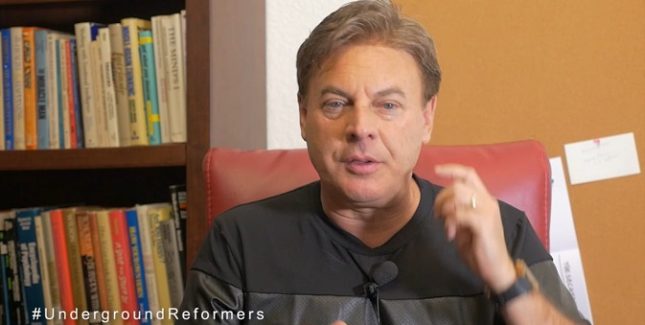 A conservative preacher and vocal supporter of President Donald Trump shared claims an “anointed” cake “saved” a gay bartender. Lance Wallnau was answering a question via a Periscope session from a viewer who wanted to stop her son from being gay, according to a video that Right Wing Watch posted online. In response, he shared the story of “hookers” who got “saved” and wanted to help a bar owner “who was gay and very adamantly anti-Christian.” So they baked him a cake and prayed over it, he said. “It was an anointed cake,” Wallnau said. “The power of God hit him while he was eating the cake.” Wallnau claimed the bar owner felt “the presence of God” while eating the cake and underwent some kind of transformation and was eventually baptized.

To make matters even more ludicrous, the preacher also announced that he conducted extensive research and managed to obtain the recipe for the “anointed cake,” which he then decided he would “patent and market to the religiously-challenged Americans.” “I have to admit, the idea didn’t come to me right away,” Wallnau said in an interview with the Dallas Morning Star. “As a matter of fact, it actually dawned on me while I was watching an old Jerry Springer re-run online. It was about a family who was nearly devastated by drugs and the father’s homosexual infidelity, but they were somehow able to find God and reunite. That’s when it hit me that there’s an entire market out there screaming for a quick fix, for something that’s able to save normal people from the plague of gays.”

He continued, “After doing some serious digging, I was able to come up with the recipe for the cake, which I’ve decided to patent and then possibly license to other church-endorsed businesses willing to join the battle against homosexualism. We have to be honest here – there are a lot of fallen Christians in this country, and a significant portion of them are simultaneously in the claws of the homosexual plague. We need a game changer here, something that’s going to tip the scales. I am confident that the anointed cake is it; we just need to market it properly. Because, at the end of the day, it’s still a product like any other and the owner of the patent, which is to say, yours truly, still needs to make a living regardless of his nobility.”

Asked to elaborate on how the cake works, Wallnau explained that it “protects normal people” from gays by making them extremely unattractive. “Now, I know what the nay-sayers are going to be on about here. ‘How’s that different from any other cake that makes people fat?’ or something or other. Well, the Anointed Cake not only makes people fat, but it also provides a one-of-a-kind religious experience to those who taste it. They are purified by it – I mean that both figuratively and literally, since in addition to bringing a person closer to God, it also brings them closer to the toilet, due to the fact that laxative is one of it’s main ingredients. When you add acne, diabetes and oily skin into the mix as well, it becomes clear that the anointed cake is by far the most powerful weapon in the war against gay people. And the best part is, you only have to eat it for two weeks before seeing the first results,” the preacher concluded.