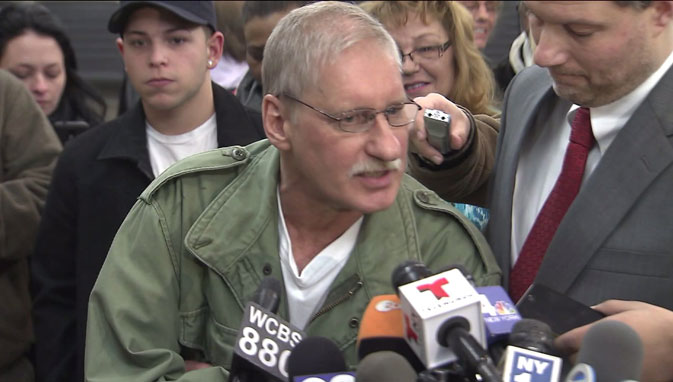 NEW YORK — David Ranta, the New York City man who had been wrongfully accused and subsequently incarcerated for nearly twenty-three years over the murder of a Brooklyn rabbi, has suffered a severe and near-fatal heart attack days after gaining his freedom.

Upon his release, Mr. Ranta began catching himself up worldly events that had occurred since 1990, the year he was wrongly imprisoned. Two days later, Ranta was struck down by a stress- and disbelief-induced heart attack

“I leave one hell, only to enter another,” a visibly shaken Ranta said from inside of his hospital room, referring to the modern world that is slowly crumbling around him. “I don’t know what’s going on anymore. I feel like the weight of the world’s on my shoulders now.”

“The first thing I find about is 9/11,” Mr. Ranta screamed out in frenzy, his blood pressure shooting skywards. “They showed me everything on a telephone. A telephone! You think the government did it?” A nurse stationed by his side calmed him down, fearing that his heart may give out once again.

“And then this Obama! I don’t understand! Is he American? Is he Kenyan? Who is he? The President? Where’s Bush?” Ranta began to scream, the paranoia in his voice confirming he has adjusted well to the 21st century.

“What do you mean there’s been two Bushes? What is a Twitter?!” Ranta was subsequently restrained and sedated for his own good out of fears for his heart.

David Ranta is among a small group of people to be excluded from the world at large. Each year in the United States, regardless of the advances in forensic science, nearly ten thousand innocents are put behind bars.

“At least in prison, I had a bed and three square meals a day. They can’t repossess or foreclose on that cell of mine either,” Ranta noted. “Now I gotta worry about drones flying off with my house or something.”

Initial reports say that Ranta has yet to read any documents about the 2008 subprime mortgage crisis, the full scope of the Global War on Terror, the crippling powers of the Patriot Act on the American people, or the pressing news of Taylor Swift’s latest boyfriend.