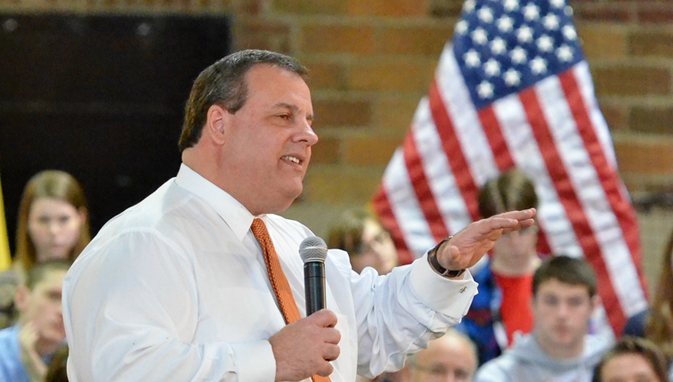 Christie Opposes Medical Marijuana For Menstrual Pain In NJ: “It Is Part Of God’s Curse For Women”

New Jersey Governor Chris Christie says that he would oppose any attempt to loosen medical marijuana regulations that would broaden the number of conditions eligible for treatment and potentially lower costs, even as his state remains one of the costliest states in which to live in the country. The legislation, introduced Monday by state Democrats, would expand the list of ailments to include things like menstrual pain, a condition that can be debilitating for some women.

“I’m sorry, but that’s how God wanted it to be,” Christie said. “This is very problematic because at the rate we’re going, we’re soon going to be prescribing marijuana for simple headaches and feeling down on any given day. I bet there are a lot of people who think that would be pretty awesome. But, there is no way I am going to allow the recreational use of marijuana and stand by while the rest of my state is being permanently anesthetized. That’s just not going to happen.”

The New Jersey Gov. also added, “I’ve got a question for you: If marijuana is so great at helping alleviate pain, and it’s been around pretty much since the dawn of time, how come women have only recently started advocating its use to help them with their so-called menstrual pain? I don’t know about you, but that sounds fishy to me. We had the damn thing all these years and centuries, and only now are women claiming it’s good for them. Come on, it couldn’t be more obvious than that. Women are liars, as every man inherently knows.”

Christie also stated that “there is no changing God’s plan,” since, apparently, it was God who “cursed women with menstrual pain,” and “all we as men can do is offer comfort. But, that’s where our support must end.” “Just think about it – what does it tell you that God cursed women, causing them to bleed once a month and still stay alive? That’s right – even he knew they would be so damaging to men at times that he had to punish them to balance things out. So, not only do I oppose marijuana for menstrual pains because of ethical reasons, I also think it’s wrong because God would be very upset. He wanted women to suffer, and there’s nothing we can do about that,” he concluded.

O’Reilly Vs. Trump: “Black People Are Uneducated, Tattooed, And Worse Than Mexicans”

John Zmirak: “Black People Are Fundamentally Dissatisfied With How God Made Them”

FFeatured
Read More
A Fayetteville councilman with a history of hostility toward the LGBT community is under fire for confronting a…
FFeatured
Read More
As U.S. intelligence officials have raised increasing alarm this week over Russia’s meddling in the presidential election, Donald…
FFeatured
Read More
Ann Coulter stopped by “The Eric Metaxas Show” on Tuesday to discuss Donald Trump’s speech following the massacre…
PPolitics
Read More
“This is nothing really,” Boehner said. “Take a look at nationwide ‘Sausage of the Month’ club memberships, and you’ll really see how grim these numbers are.”
FFeatured
Read More
“There’s more of them coming. So, when the next one happens, I’m directly going after Obama for carelessness on the job and dereliction of duty. Because, he was many things as president, but a patriot was not one of them”
FFeatured
Read More
The speaker of Britain’s lower house of parliament said on Monday he would not support any plans for…

O’Reilly Vs. Trump: “Black People Are Uneducated, Tattooed, And Worse Than Mexicans”