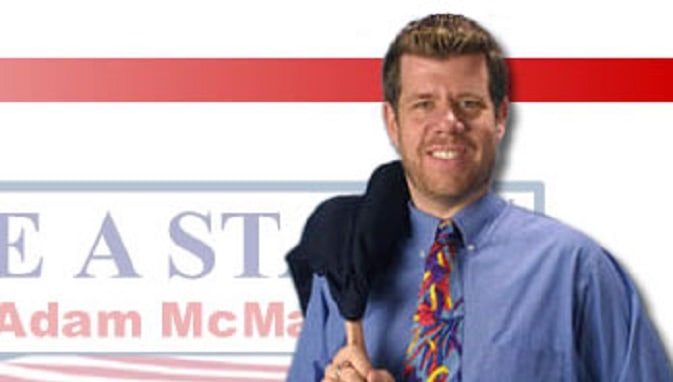 McManus: “Germans Were Silent When Hitler Put Gays In Camps, Christians Should Do The Same”

Adam McManus, a radio host and organizer of the Freedom 2015 Religious Conference, has warned that Christians were being silent about same-sex marriage in the same way that Germans had been silent about the Holocaust. “What’s going to happen when a homosexual couple comes to one of your viewer’s churches and asks for their pastor to marry them and their pastor says no, it’s against the Bible?” he asked. “Believe me, he is going to be in serious trouble. He might be fined, he might be penalized, he might even be imprisoned.

“I think of Dietrich Bonhoeffer and the words he had to say about the Germans,” McManus continued, “and who Hitler was targeting, step by step by step: the infirmed, the elderly, the mentally challenged and ultimately the Jews in the Final Solution. And because people continued to remain silent and by their silence, they agreed with what Hitler was doing, ultimately there was no one left to stand up for them when the Nazis came for them. And so, if we don’t take a stand for our own rights, which is the most obvious thing to do, it’s going impact the whole community in a negative way.”

McManus then stated that “a different kind of silence” would be more desirable at present, considering that there are “various initiatives” that call for rounding up gays and isolating them in camps so that they “wouldn’t be able to hurt innocent and unsuspecting children anymore.”

“Now, what I’m thinking here is we do need Christians to be silent, we need to continue not speaking up, but in a different way. I’ve been hearing a lot of talk lately and even before the SCOTUS decision on same-sex marriage that gays need to simply be rounded up like cattle and put in concentration camps, so as to limit their ability to corrupt young minds who wish to experiment with their sexuality,” the host stated.

He added: “I think I heard Rafael Cruz talking about it some time ago. Anyway, I believe that’s a good idea, because, you see, Germans didn’t speak up when Hitler was doing this thing, and we all know how that ended. I’m thinking, we’re pretty much after the same result here with gays and lesbians, so Christians also need to shut up and let us do our thing with the scourge of the earth. Hell, we might even take the Supreme Court justices to the camps alongside gays, so that they can see what it’s like for someone to impose on you something you detest.”

“And when the gays get tired of boinking each other and once they go through all possible combinations of gay-on-gay, guess who they’ll consider next. That’s right, the justices are going to get a hands-on experience of what they’ve made possible, if you know what I mean,” he opined.