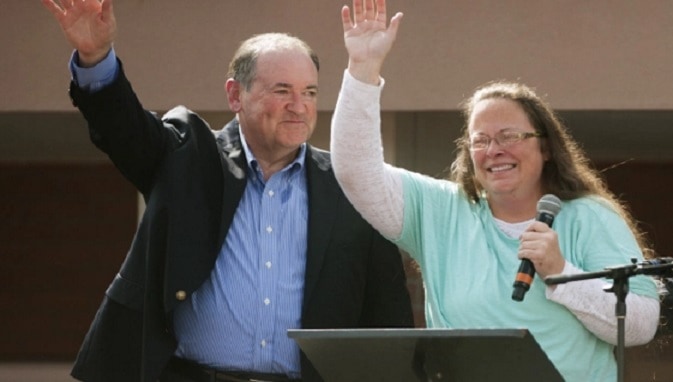 Mike Huckabee: “I Asked God To Choose Kim Davis As TIME’s Person Of The Year”

Liberty Counsel, the right-wing legal group that represented Kentucky clerk Kim Davis in her unsuccessful attempt to flout the Supreme Court’s marriage equality ruling, released a statement recently urging its supporters to “vote for Kim” as TIME’s Person of the Year, since she “inspired a nation and the world to fight for religious liberty when she chose a prison cell rather than sacrificing her conscience.”

Former governor of Arkansas Mike Huckabee told the media that it was his prayers that led to “the nomination of Kim Davis, the American national hero, for TIME’s Person of the Year award.” He also added that “if we succeed in our intention, and I am sure we will because we have the Christian community of America with us, this will be the first step of many.”

“I am proud that we’ve gotten this far. No, I apologize, I am wrong. I am proud that Kim Davis has gotten this far, despite of everything she’s been through. I don’t think I’ve even witnessed such a stubborn, yet courageous act of a woman who chose her own Christian principles over her liberty. I am on her side and will do everything I can to repay the straight man’s debt to her,” Huckabee said.

Asked how he came up with the idea to suggest nominating Davis for the award, he said: “You know, there really isn’t some elaborate explanation. I was troubled by the fact that an innocent woman suffered so much because of her principles, so one night I got down on my knees and with all of my heart pleaded to the Lord Jesus Christ to allow her to be compensated for her hardships. I prayed with all of my strength and my prayers have been answered.”

Huckabee also added that “this is only the first step of Davis’ political career.” “I am firmly intent on making sure Kim Davis becomes a symbol of national resistance to the gay lobby that is plaguing America. I am adamant about the fact that she is the best and most powerful weapon we’ve got against the LGBT community and so help me God, I will be there for her until our mission is completed. Mark my words – in a couple of years, you could be addressing that woman as Mrs. President.”