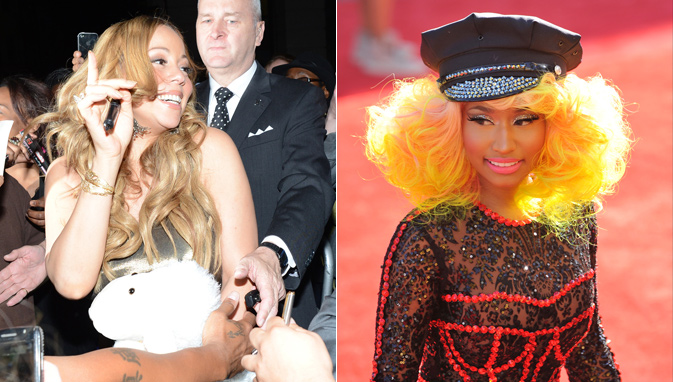 LOS ANGELES — Rapper and singer Nicki Minaj has reportedly devoured a piece of songstress Mariah Carey’s face on the most recent taping of “American Idol” auditions. The feud between the two divas was first reported earlier in October, with Minaj allegedly calling the Grammy award-winning Carey a “bitch” during the early rounds of the show’s eleventh season. According to insiders, the tension has only risen in subsequent tapings, culminating in Carey’s hospitalization on the morning of October 22.

Minaj, whose contribution to the Kanye West song “Monster” was widely acclaimed by critics and listeners, is said to have screamed the final line of her verse – “I’m a motherfucking monsta!” – before launching herself on Carey and biting her left cheekbone, tearing off a chunk of the “Always Be My Baby” singer’s flesh.

Carey was rushed from Hollywood’s famous Kodak Theatre, where the set of auditions took place, to the Cedars Sinai Medical Center. She is reportedly in stable condition, with a skin graft surgery scheduled to take place later today. “Idol” producers expect the singer will make a full recovery.

Carey’s husband – media personality, actor, and attempted recording artist Nick Cannon – has spoken to the press about the “shameful, disgusting attack,” pressuring “Idol” producers to take action against Minaj. “The bitch needs a muzzle and some serious therapy,” Cannon told TMZ. There is no word, however, on what exactly the producers of “Idol” will do to quell the feud and prevent further violence.

“I think it’s rather entertaining, to be honest,” said Nigel Lythgoe, an “Idol” producer and judge on another Fox show, “So You Think You Can Dance.” “Rumor has it that, back in the early 2000’s, Mariah bitch-slapped Whitney, so a retaliation against Nicki is a likely, and probably very dramatic, event.”