BOSTON—Massachusetts Governor Deval Patrick and Missouri Governor Jay Nixon have entered into a friendly wager on the outcome of this year’s World Series matchup between the Boston Red Sox and the St. Louis Cardinals: the respective governors have reportedly agreed that the losing party will reverse his state’s stance on LGBT rights.

Friendly sports gambles between politicians of rival cities are a mainstay of American culture. Following Super Bowl XXXIX in which the New England Patriots defeated the Philadelphia Eagles, Pennsylvania Senator Rick Santorum was forced to wear a Patriots hat and present Senator Ted Kennedy and his staff Philly cheesesteaks. During the 2010 Winter Olympic Games, President Obama and Canadian Prime Minister Stephen Harper wagered a case of beer on the outcome of the gold medal game in the men’s ice hockey tournament.

“As the Red Sox and the Cardinals meet again on baseball’s biggest stage, in the spirit of healthy fun, Governor Nixon and I have agreed to stake the legal equality of our gay citizens on the World Series,” a statement from Governor Patrick’s office read. “If the Red Sox win, Missouri will immediately legalize same-sex marriage. Should the Cardinals win, Massachusetts will revert to treating homosexuals like second-class citizens.”

A representative from Governor Nixon’s office confirmed the existence of the bargain and released a statement from Governor Nixon, which read in part, “The state of Missouri will recognize gay couples as the legal equals of straight couples if Boston wins, so you better not let us down, Cardinals!”

Massachusetts was the first state to legalize gay marriage in 2004. Missouri did not legalize consensual sodomy until 2006, three years after the Supreme Court ruled laws banning consensual sexual activity unconstitutional, and has had a ban on recognizing same-sex marriages since 2004.

When the Cardinals and Red Sox previously met in the World Series in 2004, Missouri governor Bob Holden and Massachusetts governor Mitt Romney wagered that the loser would have to watch the other run for president and be defeated.

“I know that the 52% of our citizens who are opposed to gay marriage might be concerned our wholesome state may become a modern-day Gomorrah, but that’s all the more reason to make sure we turn out in force to support our boys!” Nixon’s statement concluded.

The series begins Wednesday night in Boston before switching to St. Louis for Game 3 on Saturday. While no official word on the political wager has been issued from either clubhouse, Cardinals outfielder Carlos Beltrán is reportedly “deeply conflicted.” 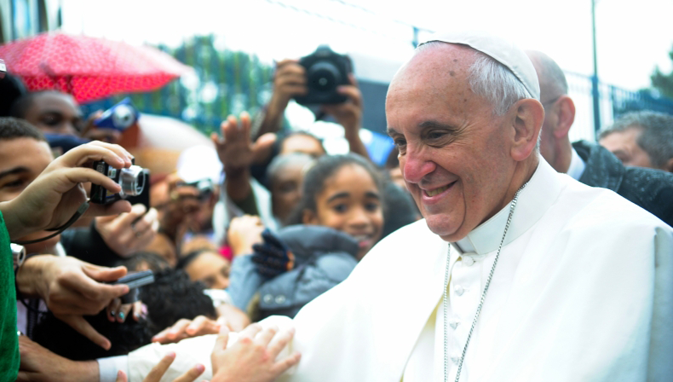 Focus on the Family Asks Vatican For New Pope