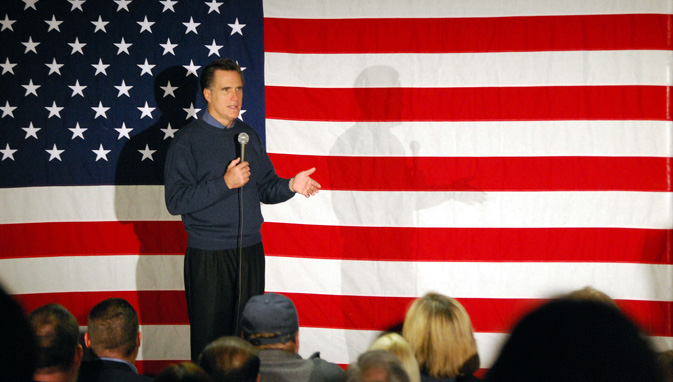 CLEVELAND — In an effort to appeal to women voters, many of whom have identified Mitt Romney as “chauvinistic,” “cold,” and “sterility inducing,” the GOP presidential hopeful plans to perform pieces from “The Vagina Monologues” at upcoming campaign stops. With this highly unanticipated move, Romney expressed hopes for voters to “get a chance to see me from a different angle. A lady parts angle.”

Romney’s original monologue hoped to express sincere empathy with the feminine plight: “My vagina is a temple. My vagina is a delicate flower, thirsty for dew. My vagina is the trickle-down effect, bearing fruit through hard work suitable to vaginas, like getting a typist degree or dusting. My vagina lowers taxes on the rich and puts fewer regulations on the free market. My vagina’s fruit can now prosper, and its little fruit employees will do slightly better, too.”

Among the most vocal critics of Romney’s plan are women themselves. “I’m sorry but there’s nothing Mitt Romney could say that would make me believe that he understands what it’s like to be a woman in America,” says Shana Harding.

Anticipating such apprehension, Romney preemptively responded to his future critics in his first campaign performance, stating, “My vagina knows what it feels like to be discriminated against. When my vagina told the liberal media about its theatrical ambitions, they said, ‘But you are a man. You have a penis.’ I won’t let them control my body. I won’t let their rules and laws dictate my vagina.”

Adding to the controversy is the political nature of Romney’s monologues. Many women feel that his monologues resemble a campaign speech rather than an attempt to reach women on a personal level.

“When he stands up there and says things like, ‘My vagina never feels more fulfilled than when she’s staying at home with the kids, which is the hardest job in the world, something Obama will never understand,’ I can’t help but feel that something there isn’t quite right,” says Jacqueline Dawes, an avid fan of “The Vagina Monologues” and Cathy comics. “It doesn’t make me feel like he’s trying to relate to women, but that he’s just trying to push his agenda. Maybe it would help if he didn’t keep saying how his vagina wants to cut Planned Parenthood funding.”

Romney recently sat down with Newslo and discussed his initial hesitance about the “Vagina Monologues” strategy. “At first, I thought it would be useless because I figured most women couldn’t read, so they either didn’t vote or just went along with whoever their husband was voting for, like in sports. But then I realized there are a lot of women out there who care about certain issues, and that Siri can read everything out loud for them. I knew I had to try to reach out in plain, simple terms and use bright, primary colors and shiny things like Venn diagrams to keep their attention.”

Romney feels that the monologues could help women finally make an educated choice. “I think so many women feel that advancements in social justice are a positive thing,” the candidate said. “But the reality is that it’s only hurting the labor market – you know, the important things.”

In the coming weeks, Romney will head to Arizona, where he plans to celebrate Hispanic Heritage Month by eating at Chipotle, napping excessively, and discussing his favorite tango performances on Dancing with the Stars.